Arlington Heights police and firefighter/paramedics responded about 5:55 p.m. Tuesday to a report of a vehicle vs. tree crash and rollover in the 300 block of South Windsor Drive, near Grove Street. Police arrived to find a black Volkswagen GTI uprighted after it apparently rolled over while hitting a tree on the west side of the east portion of Windsor Drive. The vehicle stopped almost in the middle of the boulevard park less than 100 yards from the crash site where John ‘Jack’ Gavin was killed as a passenger in a car crash with a tree that occurred about 1:00 a.m. Thursday, March 24, 2011. 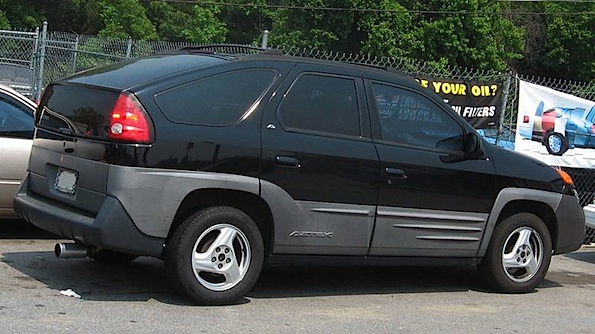 FILE PHOTO: Pontiac Aztek: This morning a commenter, checking in as a witness, stated the offending vehicle was a blue and black Pontiac Aztek, not a blue Chevy Suburban.

Arlington Heights police are investigating the scene with an evidence technician taking photos of the crash site. Police were also gathering witness information and driver statements for investigation.

Neighbors in the Stonegate subdivision have attempted to gain additional traffic controls or enforcement in the stretch of Windsor Drive between Kensington Road and Northwest Highway, but efforts or proposals were declined by the Village of Arlington Heights, according to witnesses at the scene.

There have been at least four crashes involving vehicles leaving the roadway (one fatal) in the last four years in the neighborhood.