Franklin Park firefighters responded about 2:00 a.m. Thursday to a fire at a vacant Super 8 hotel. The fire alarm was quickly elevated to a second level box alarm by about 2:15 a.m. The fire alarm was elevated to a 3-alarm fire at about 3:00 a.m. Firefighters used six aerial trucks to attack the fire, which was slowly destroying the roof. Even with six aerial attacks, parts of the roof that were not deluged would flare up. Fire command decided to let a major portion of the roof burn.

At 6:00 a.m. the fire was still burning parts of the roof, and heavy black smoke was thicker or more noticeable after sunrise. 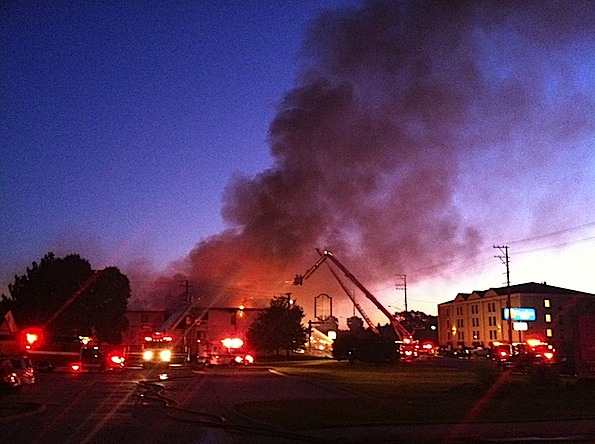 Photo of the fire scene at 3010 Mannheim Road at about 6:00 a.m. Thursday after ongoing fire operations of at least four hours, which included the use of six aerial trucks.