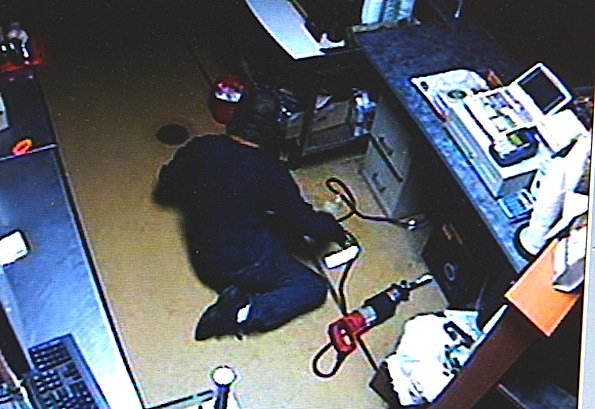 Still image from security video of break-in to a safe at Quiznos in Barrington, Illinois.

Barrington Police are investigating a burglary of a Quiznos Sub Shop, 100 West Northwest Highway, and are aksi for the public’s help in trying to determine the identities of two men who used power tools, including a Reciprocating Saw to pry open one safe, then drag a second safe away from a Quiznos Sub Shop early Sunday morning.

At least one offender (shown above), was captured on video surveillance equipment while breaking into the safe. Two offenders burglarized the Quiznos, broke into a safe, stole a second safe, and removed about $2,400 cash. The offenders were described according to video review as wearing dark-colored clothing, gloves and black masks that covered their faces. The offender escaped in a car that was parked nearby.

The crime is reported to have occurred between 2 a.m. and 3 a.m. early Sunday morning. Police believe an offender or offenders cut the Internet and phone lines at the store to defeat the burglar alarms and Internet video feeds before two offenders broke in through the rear door of the Quiznos.

The offenders, during an elapsed time of about 26 minutes inside the Quiznos, used power tools to break into and steal about $1,300 from the first safe, dragged a second safe containing about $800 away from the business, and used tools to pry open a locked cash drawer to take about $300.

According to Barrington police, the two-man crew may be linked to four other robberies in the area.

Any citizens with information about the men or burglary are urged to call the Barrington Police Department at 847-304-3300.