More tornado fatalities and damage from the same track of storms that began Thursday in Oklahoma.

100 tornados were reported in North Carolina, South Carolina and Virginia on Saturday, April 16, 2011. A tornado is reported to have destroyed a Lowe’s home improvement store at 3015 South Horner Boulevard, Sanford, North Carolina.

Numerous other reports of damage are expected through central North Carolina.

The Cardinal Grove subdivision in Raleigh was also hit hard — possibly by a tornado.

Last May Lowe’s Donated $50,000 to the American Red Cross for Flood and Tornado relief efforts. Lowe’s served as cash donation sites for contributions. As recently as Friday, Lowe’s of Wytheville, Virginia donated about $2,000 in merchandise to Pulaski, Virginia tornado victims. 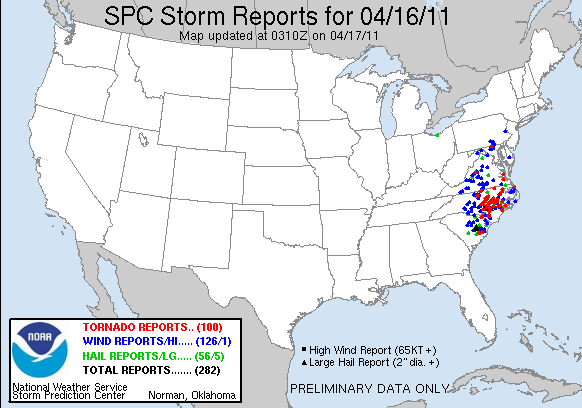 The population of Askewville, North Carolina was 180 at the 2000 census.