Chicago police responded about 1:00 p.m. Wednesday to a bank robbery at the TCF Bank in the 2500 block of North Narragansett Avenue. The offender made a “verbal threat” to a teller and demanded cash from a bank drawer. The offender did not display a weapon, and was described as a male/white 5’9″ to 5’10” husky build, about 25-30 years old with brown hair. He was wearing a Cubs hat and a black pea coat. 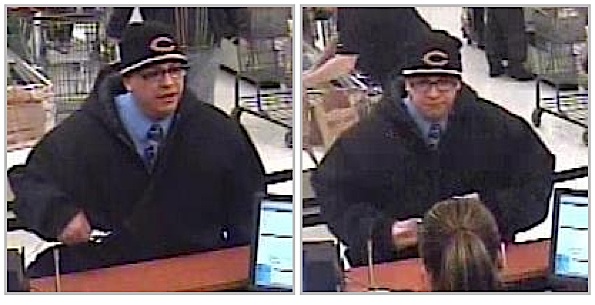 Stickney police responded just after 3:20 p.m. to a robbery at the TCF Bank in the 7100 block of West 40th Street in southwest suburban Stickney. The offender was described as a male/white or male/Hispanic 5’9″ to 5’10” medium build with brown hair and brown eyes. He was wearing a dark hooded jacket and a blue winter Bears hat with a white stripe. He was also wearing dark, framed glasses.

Both bank robbers may have had female getaway drivers.

Citizens with information about this robbery are urged to call FBI Chicago 312-421-6700.