Long Grove firefighter/paramedics and Lake County Sheriff’s deputies responded about 9:15 p.m. Sunday to a report of a house fire in the 2200 block of Stayton Lane that appeared to be from a lightning strike. Neighbors near the house called the fire department after seeing the fire early after ignition.

Firefighters from Buffalo Grove, Lake Zurich, Palatine Rural, and Prospect Heights, automatically responded to the reported house fire at this address. Some equipment automatically responding were tenders or tankers which carry thousands of gallons of water. The neighborhood has not fire hydrants.

Firefighters reported flames and smoke showing and immediately hit the fire with heavy water streams totaling about 600 gallons from the outside and used a fire extinguisher from within the attic.

There were no reports of any injuries, and all residents, including a dog, evacuated the house before firefighters arrived.

In addition to fire damage to the peak at the roof, a char mark was visible near a second-floor gutter on the north side of the house. According to fire officials, the lightning apparently struck a satellite dish and grounded through the electrical system of the house, damaging at least three electrical outlets, and tripping eight circuit breakers. Power was shut off until electric inspection and repairs can be made. 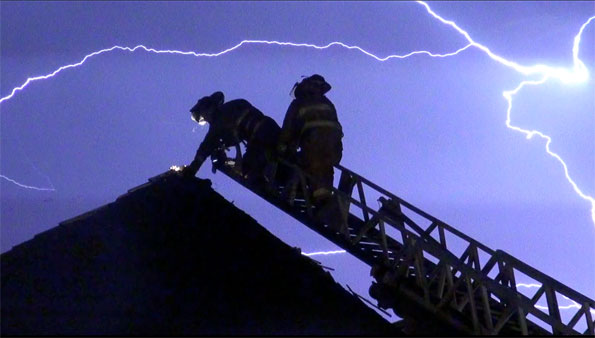 Firefighters inspecting the roof of a house that was struck by lightning in the 2200 block of Stayton Lane, Long Grove.

Firefighters worked very carefully to inspect the roof for hidden fire, in order to prevent re-kindling. A quint truck from Buffalo Grove with a ladder was able to back into the driveway to give firefighters safer access to the roof. A full-size ladder tower truck was too big to get to the desired location on the roof with the ladder. 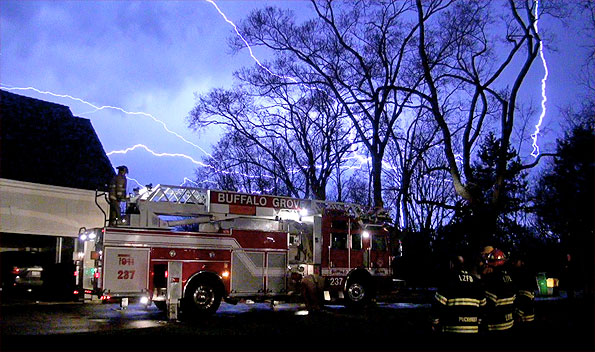 Lightning was a serious factor in the safety of fire operations. A small storm had passed through Long Grove just before 9:15 p.m., which brought the lightning that ignited the house, but a larger storm was arriving from the southwest. Fire command checked with the dispatcher’s office at Red Center to get an update of the storm’s expected arrival. Fire command used that information and sky observations to bring firefighters off the roof temporarily for safety protection from another lightning strike. A spectacular lightning display was seen, but the lightning visible was cloud-to-cloud lightning from storms that were pounding southern areas in southern Cook County and along Interstate 80. There was uncertainty if those storms would drift far enough north to bring another round of cloud-to-ground or cloud-to-house lightning. Of course, firefighters on the truck’s main ladder would be at serious risk. Firefighters were seen bravely working on the roof with spectacular lightning in the background.

Firefighters did a remarkable job stopping the fire. Combined with the early report of the fire by alert neighbors, the stricken house was saved from heavy damage from a very serious fire.