VIDEO FEB 24 2011: NASA’s most traveled space shuttle took off on its final voyage after nearly three decades of service. Discovery’s journey to the International Space Station marks the beginning of the end of the shuttle era. Only two more missions are left.

Space Shuttle Discovery (Orbiter Vehicle Designation: OV-103) is one of the three currently operational orbiters in the Space Shuttle fleet of NASA, the space agency of the United States. (The other two shuttle names are Atlantis and Endeavour.)

Foam fell off of the Shuttle’s exterior after the process of liftoff. Possibly showing debris at 28 seconds in video above.

When first flown in 1984, Discovery became the third operational orbiter, and is now the oldest orbiter in service. Discovery has performed both research and International Space Station (ISS) assembly missions.

Discovery has flown 38 flights, completed 5,247 orbits, and has spent 322 days in orbit. Discovery is the orbiter fleet leader, having flown more flights than any other orbiter in the fleet, including four in 1985 alone. Discovery flew all three “return to flight” missions after the Challenger and Columbia disasters: STS-26 in 1986, STS-114 in 2005, and STS-121 in 2006. 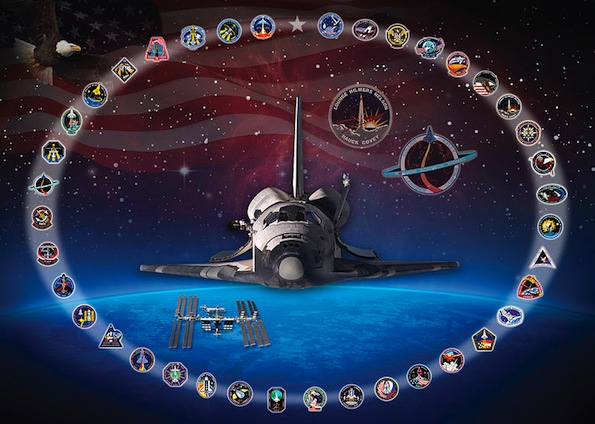