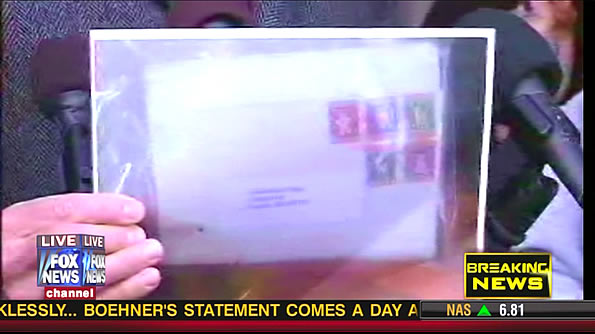 One of two similar package representing the type of hostile incendiary device that injured the fingers of two people in Maryland Thursday afternoon.
Two devices — similar parcels recently mailed to embassies in Rome and in Greece — carried the statement: “Report suspicious activity. Total bulls..t! You have created a self fulfilling prophecy.”

Annapolis police and firefighters responded to two small explosions in the city just before 1:00 p.m. and 1:30 p.m. ET Thursday. Small detonation “not explosions” at two Maryland state government office buildings caused minor injuries to a person at the Jeffrey Building in Annapolis, Maryland. The injuries are reported to involve fingers.

A device detonated about 1:00 p.m. at the Maryland Department of Transportation headquarters near Hanover, Maryland, and a device detonated at about 12:25 p.m. in the mailroom of a state House office building, the Jeffrey Building, in Annapolis, Maryland. Both detonations that occurred when the packages were opened, involved a small flash, small amount of fire, smoke and a sulfur smell. Sulfur is similar to the smell immediately after the striking of a match.

No property damage has occurred. No explosive material has been found at the early stage of the investigation.

Early indications are that there was a message or messages associated with the incidents. Officials were silent at first, but later it was released that the packages carried the statement: “Report suspicious activity. Total bulls..t! You have created a self fulfilling prophecy.”

The second package was addressed to the Maryland Department of Transportation via the United State Postal Service.