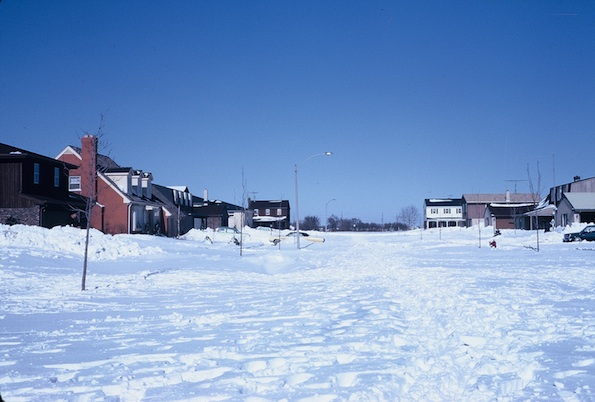 Belmont Avenue in Arlington Heights immediately after the ‘Big Snow’ of 1967.

RECORD SNOWFALL?
There is a sentence or two in the technical discussion of the National Weather Service that has The Cardinal thinking big about records …

TOTAL SNOWFALL IS CURRENTLY FORECASTED FOR THE EVENT IN EXCESS OF ONE FOOT TO SOME LOCATIONS RECEIVING UP TO TWO FEET. THERE CONTINUES TO BE A FEW MODEL SOLUTIONS THAT HAVE SUGGESTED SNOW RATIOS WOULD BE SLIGHTLY HIGHER…WHICH COULD LEAD TO STORM TOTALS MUCH HIGHER.

The Snow Storm record for snow accumulation is 23.0 inches, which occurred during the ‘Big Snow’ for the period January 26-27, 1967.

The ‘Big Snow’ record seems to be threatened by the upcoming storm, which has already been named the ‘Ground Hog Day Blizzard’ by Accuweather meteorologists. The blizzard is forecast for Tuesday, February 1 to Wednesday February 2, 2011.

An arctic blast plummeting into the Rockies and Plains over the next couple of days will set the stage for snow to be measured in feet from Columbia, Mo., to Peoria and Chicago, Ill., Tuesday into Wednesday.

The record for Chicago for greatest amount of snow in a calendar day from midnight to midnight is 18.6 inches, which occurred January 2, 1999. Depending on the timing of the storm, that record might be a little harder to break … unless that particular phrase ‘WHICH COULD LEAD TO STORM TOTALS MUCH HIGHER’ holds true, and the calendar day total beats out the previous snow storm total record.

Here’s a sneak preview of a cousin site for The Cardinal — Arlingtoncardinal.com …
it’s The Florida Cardinal — FloridaCardinal.com (link to the Miami Beach Weather page). Sort of hard to believe we’re in the same country.