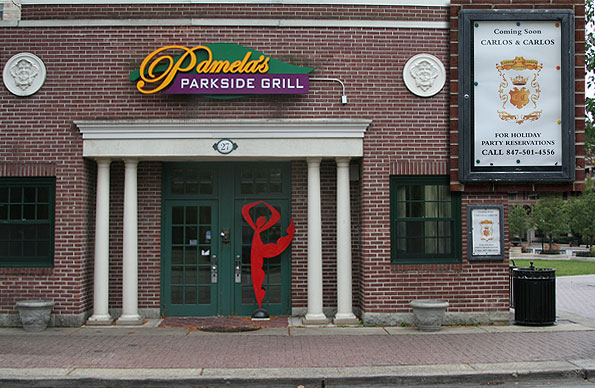 Carlos & Carlos, a downtown Arlington Heights favorite restaurant, which was closed in June 2010 after its rent increased from $6,000 per month to $11,000 per month, is scheduled to open in December at the site of the former Pamela’s Parkside Grill and Regina’s Italian restaurant. Pamela’s Parkside Grill carried out two upgrades to the location. The first upgrade was constructed prior to opening. The second upgrade, including the installation of large windows with a view of Harmony Park, was constructed just before closing.

According to Carlos Montiel, the new Carlos & Carlos will feature a familiar menu, including fresh pasta prepared in front of customers.

With help, owner Carlos Montiel was able to purchase the location at 27 W. Campbell St., and plan the re-opening of Carlos & Carlos. Montiel’s company also owns Capriccios in Northfield, restaurants in Costa Rica and Guatemala, and coffee and macadamia farms in South America.

The re-opening of Carlos & Carlos marks the fourth downtown restaurant to close and re-open in the past year. Biggby’s Coffee shut down last year and was re-opened in the summer by Arlington Heights resident Tim Mickelson. Fuego Mexican Grill was closed a short time in March, 2010 and re-opened as Salsa 17 after a partner who owned rights to the ‘Fuego’ name left the business. Grand Station, which originally opened in September 2009, closed this summer for a short time and re-opened in the same spot with new owners. Dusko Filimonovic, previously managed Carlos & Carlos, and is now the manager at Grand Station. Former Fuego Mexican Grill chef Juan Luis Gonzalez now manages and serves Mexican and Latin cuisine at Mago.

Outside the span of a quick turnover for re-opening … Eddies Restaurant & Lounge, 10 East Northwest Highway, re-opened with new owners in its same location late last year after being closed for several years.

Become a fan of The Cardinal food page — Arlington Taste Buddies. Submit your pictures or just stay up-to-date on dining and food topics in Arlington Heights. For a list of all of The Cardinal Facebook fan pages, go to Arlingtoncardinal.com/about/facebook …