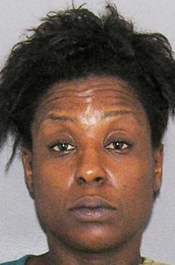 Drug paraphernalia — a broken fragment of crack pipe — was also found in her purse. Colondra Hamilton was jailed in the Hamilton County jail on a misdemeanor count of driving with ‘impaired alertness’ and was charged with possession of drug paraphernalia. No indecency charges were filed.