Video during peak heat and intensity of the fire at WINGS at 756 East Northwest Highway in Palatine, Illinois. 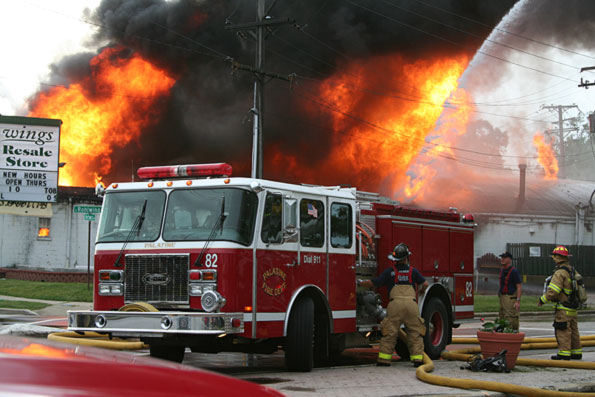 Palatine Fire Department responded to a burning transformer and arcing power lines in the 700 block of East Northwest Highway about 4:00 p.m. Friday. Either high winds or a lightning strike caused a transformer problem and a downed power line. At first firefighters reported a primary line down near the building at 756 East Northwest Highway, and evacuated customers and employees from the building after a severe thunderstorm came through the area — just before 4:00 p.m. A high volume of emergency calls for downed lines and downed trees from a severe thunderstorm started coming in to Northwest Central Dispatch 9-1-1 Center and Com Ed at about 4:00 p.m. After a few minutes on the scene at 756 East Northwest Highway, Palatine police and firefighters reported smoke coming from the building. Early in the fire department operations, the fire scene was declared a defensive operation, apparently because of the danger of the energized power lines and the risk associated with the roof structure, known as a bowstring truss. A truss is a construction piece that looks like a bridge that holds up the roof. Also, early in the firefighting operations, the commanding officer alerted firefighters to the establishment of a collapse zone. A collapse zone is a distance (on both sides of a wall) equal to the height of the wall that is in danger of collapse. The walls at WINGS could have collapsed inward or outward if the truss roof collapsed. When a collapse zone is declared, firefighters are essentially ordered to stay out of the danger area near the walls. Brick and mortar can fly out even further than the heights of the wall in a violent collapse. In summary, firefighters were hampered by unsafe conditions caused by energized power lines that were arcing on the building, and the risky nature of a bowstring truss roof, which can collapse suddenly and early in a structure fire.

The original arcing about 4:00 p.m. apparently sparked a fire in the attic or roof area. Smoke seemed to be settling down as firefighters did the best they could under the circumstances. Suddenly the arcing increased about 5:15 p.m. on the north side of the building. A crew of firefighters on the southeast side of the building rushed to see if the crew at the north side was O.K. They were startled, but no firefighters were injured by that incident. Soon heavy smoke was coming out of the WINGS Resale Store. 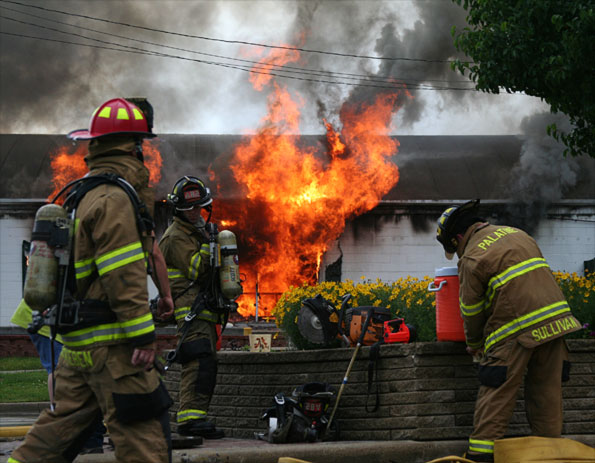 Firefighters had already been chasing the fire in 90°F weather when it broke through the windows and roof.

Just before the major arcing at the north side of the building, a crew had found a safe spot to ventilate the roof to get some heat and gases out of the building. Unfortunately, the roof could not be ventilated in multiple locations because of the unsafe nature of the roof and because of energized power lines near the roof that made navigating the roof with ladders from ladder trucks impossible. Smoke seemed to have diminished and the building had the appearance that the fire was under control, but then smoke started rolling out of the eaves and windows on all sides of the building immediately after the severe arcing that hit the north wall (see second video below with first evidence of gutters arcing just after 6:26 elapsed time and with more spectacular arcing at the end of the video). It appeared that the truss roof had ignited and started to become engulfed in flames. An orange glow started to show in the light smoke in the ceiling — visible through a window. Whatever firefighting had been underway before the second group of arcing, was hampered. Soon heavy black smoke formed and then flames broke through windows and the roof. At that point the firefighting was in a totally defensive mode. Flames eventually rose up about 70 to 100 feet into the air with thick black smoke. Heat was very intense across Rohlwing Road and even firenados rising from the roof were visible on the north side in the fire and smoke. The wind was from the south. 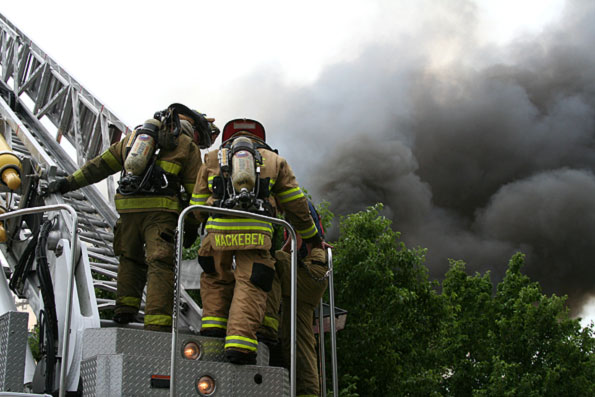 Firefighters prepare to get up into the basket of Tower Ladder 85.

Reports heard on Friday that the call center at Com Ed was not fully functioning due to a storm-related problem at the time of the WINGS fire.

A huge crowd gathered in the Harris Bank parking lot, as heavy smoke crossed to the Willow Creek Condominium property. Police moved the crowd back as the fire, heat and smoke became more intense.

No injuries reported in the fire.

Northwest Highway was blocked in both directions for at least one-quarter mile in each direction of the fire. Rohlwing Road was also blocked completely to all traffic.

WINGS relies on the support of volunteers and financial contributions to continue providing housing and emergency shelter to women and children in need. Many people donate women’s and children’s clothing, furniture, household goods and food.

The store will be looking for help from the community to get the shop back to full functioning as soon as possible.

Palatine firefighters also called for an extra-alarm fire at the 1400 block of Winslow for an apartment fire Friday evening.