TRAVEL CAUTION: SMUGGLING AND ILLEGAL IMMIGRATION MAY BE ENCOUNTERED IN THIS AREA.

Earlier this month, Governor Jan Brewer sat in the Oval Office with President Barack Obama to discuss the critical issue of border security. The Governor personally related to the President the concerns of millions of Arizonans over the lack of security on Arizona’s southern border. During their visit, President Obama committed to present details, within two weeks of their meeting, regarding his plans to commit National Guard troops to the Arizona border and commit to spend $500 million in additional funds on border security.

Governor Brewer remains eager to receive the specific details of President Obama’s border security plans. She continues to extend an invitation to the President to visit with families living along the southwestern border and see the situation firsthand. 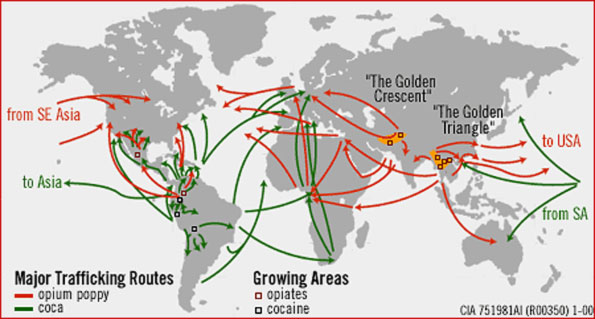 CIA Map of International Drug Smuggling Pipelines (Opium Poppy/Heroin – Red; Coca – Cocaine – Green).This image is a work of a Central Intelligence Agency employee, taken or made during the course of an employee’s official duties. As a work of the U.S. federal government, the image is in the public domain.