Interview with eyewitness Joe Lukawski, who saw the crash involving a power line utility pole near Thomas Middle School. Police suspect the driver may have hit the pole first, which may have lowered the lines.

UPDATE: Arlington Heights Road northbound and southbound lanes closed again between Thomas Street and Olive Street at about 5:15 p.m. Monday for 20 minutes repair power lines that were brought down in the accident this morning.

Arlington Heights police and firefighters responded about 7:20 a.m. Monday to a report that a car crashed into a utility pole at Arlington Heights Road and Thomas Street. But it turned out that it might have been the utility pole that crashed into the car. A witness reported that a red landscape truck trailer clipped low power lines across Arlington Heights Road. The contact caused a utility pole to snap and caused a transformer or wires to explode and arc overhead on the east side of Arlington Heights Road. The falling lines caused vehicles in the northbound and southbound lanes to scurry out of the way of the hazards. The utility pole crashed onto the front of a blue Ford Focus that may have been exiting the medical center parking lot at 1430 North Arlington Heights Road. Or the car crashed into the pole first, weakened the pole, which snapped when the landscape truck hit the lowered lines. The police will be working to investigate the details. Either way, the impact caused severe front end damage to the vehicle and left a powerline over the damaged hood of the car. The woman that was driving the Ford Focus was reported injured, but had to remain in the car because of the life safety hazard of the power lines on the car. Firefighter/paramedics were prohibited from treating her with direct patient contact because they could not touch the car until the power lines were removed from the car.

Firefighter/paramedics had to wait for Com Ed to de-energize the lines and lower the power lines that were draped across Arlington Heights Road. As soon as the power lines were de-energized and removed, the woman was rescued from her vehicle and transported to Northwest Community Hospital.

A crossing guard for Thomas Middle School was at his post at Arlington Heights Road and Thomas Street crossing children that were on the way to morning classes. No other injuries were reported. 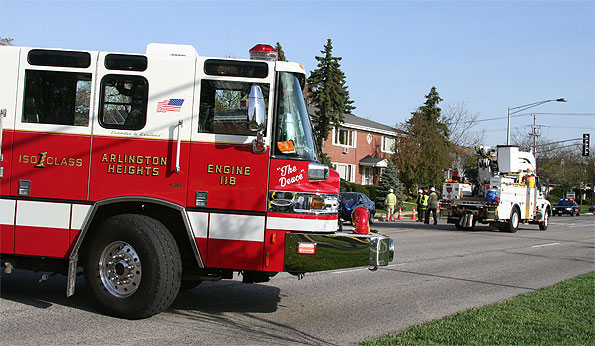 AHFD Engine 2 blocked the northbound lanes of Arlington Heights Road during the rescue of a woman trapped in her car by a downed power line.