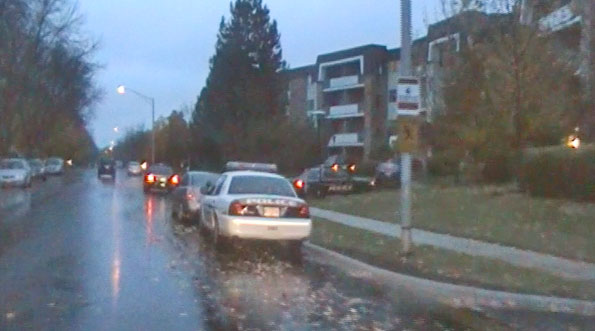 Police at the crime scene at 3300 North Carriageway in Arlington Heights where Daniel G. Levine stabbed his 86 year-old grandmother.

Suspect Caught in the 2800 Block of North Dunton Avenue
Arlington Heights police were searching the area of 3300 North Carriageway and Daniels Court on the north side of Arlington Heights after a grandson apparently attacked his grandmother on the first floor of a multi-dwelling condo/apartment style building at 3300 North Carriageway. During the attack, Daniel Levine stabbed his grandmother with a knife about 5:00 p.m. Thursday and fled the scene.

Suspect Daniel G. Levine, 24, was described as a male/white in his 20’s, 5′ 5″ with very short hair, wearing T-shirt and jeans. His shirt had long sleeves and his pants were baggy pants. The suspect may have been driving a Toyota Corolla, possibly with Colorado license plates. He is allegedly the grandson of the victim. Levine was charged with attempted murder and aggravated battery with a knife — both Class X felonies with sentences up to 30 years in prison.

Arlington Heights Fire Department paramedics treated the grandmother and transported her to Advocate Lutheran General Hospital Level One Trauma Center in Park Ridge. Her condition is listed as stable in the Surgical Intensive Care Unit.