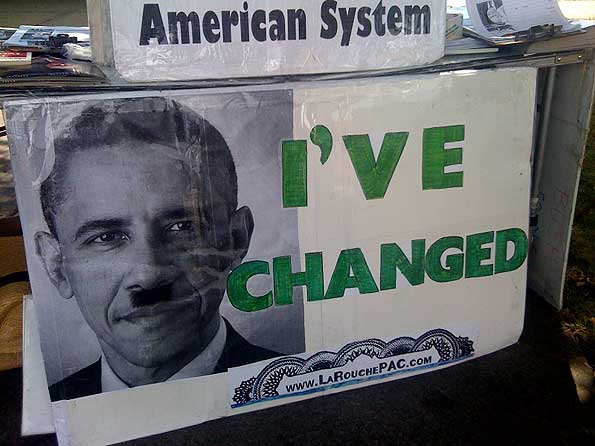 Police were called at least twice by LaRouche activists in Arlington Heights and once in Buffalo Grove Tuesday afternoon in response to people who were displaying anger over being offended by anti-Obama posters that depict President Barack Obama with a Hitler-style mustache. The posters were displayed at an information table concerning political activism against Obama’s health care plan and his administration’s economic bailout policies. The info booth and protest signs by LaRouche Political Action Committee constituents were setup at the United States post offices in those towns. People usually threaten to tear apart posters or to assault the LaRouche supporters holding them. The LaRouche activists called police when situations appeared ready to get out of control.

LaRouche’s comparisons of U.S. President Barack Obama to German dictator Adolf Hitler in 2009 have generated controversy. LaRouche has called Obama’s actions “impeachable,” without actually calling for impeachment, due to his support of health insurance reform that LaRouche says is comparable to Hitler’s Action T4 euthanasia program. Action T4 was a program, also called Euthanasia Program, in Nazi Germany spanning October 1939 until August 1941, during which physicians killed 70,273 people described in Hitler’s secret memo of September 1, 1939 as suffering patients “judged incurably sick, by critical medical examination”. The LaRouche movement has printed pamphlets with a picture on the front showing Obama and Hitler laughing together, and have made posters of Obama wearing a Hitler-style mustache. The activists at the post office offer informational booklets, request donations to the political action committee and inform people to check their website at larouchepac.com.

One booklet is entitled, ‘The People of the United States No Longer Accept their President or Congress’ and another ‘Act Now to Stop Obama’s Nazi Health Plan!’. Another flier is titled ‘LaRouche Demands Bankruptcy Reorganization Now’ calling for immediate bankruptcy reorganization of the entire Federal Reserve System before the dollar-based global financial system crashes. The flier claims that ‘President Obama is breaking down, his policies are collapsing — like so-called health care reforms which are nothing more than a mirror image of Hitler’s 1939 euthanasia policies.’ La Rouche claims that Obama’s policies are run from the British monarchy in London, not from anything in the United States.

Background …
LaRouche was credited by press in Italy, Argentina, and Mexico as the economist who successfully forecast the financial crisis of 2007–2009. Covering a press conference at the European Parliament in Strasbourg on December 17, 2008, Ivo Caizzi of the Italian newspaper Corriere della Sera referred to LaRouche as “the guru politician who, since the nineties, has announced the crash of speculative finances and the need for a New Bretton Woods.” The article asserts that Italian Economics Minister Giulio Tremonti is “an attentive reader” of LaRouche’s anti-Free Market and anti-Marxist writings.

In August 2007, LaRouche authored the “Homeowner and Banks Protection Act of 2007”, designed to freeze mortgage rates, halt foreclosures, and prevent banks from closing their doors due to insolvency. His organization and particularly his youth movement began lobbying both the congress and also state and local governments for the passage of this legislation, in what they characterize as an unsuccessful attempt to prevent the subprime mortgage crisis.

LaRouche drafted legislation in 2006 that would rescue the failing U.S. auto industry by having the federal government intervene to retool it for the purpose of building machinery for infrastructure development. This initiative was unsuccessful.

In 2005 LaRouche campaigned against the privatization of Social Security, asserting that this was an issue that could successfully mobilize the population against the policies of the Bush administration.

In its 2004 assessment of presidential candidates, the National Right to Life Committee gave LaRouche a grade of 75% and declared that he is “pro-life in every way (against euthanasia, capital punishment, etc).”

LaRouche was present in Boston during the 2004 Democratic National Convention but did not attend the convention itself. He held a press conference in which he declared his support for John Kerry and pledged to mobilize his organization to help defeat George W. Bush in the November presidential election. He also waged a campaign, begun in October 2002, to have Dick Cheney resign or be dropped from the Republican ticket.

In his January 3, 2001 webcast, LaRouche warned that the incoming Bush administration would attempt to govern by crisis management, “…in other words, just like the Reichstag fire in Germany.

In the 1980’s LaRouche was harshly critical of Jimmy Carter, who he competed against for the Democratic Party nomination in the 1980 primaries. LaRouche was sentenced to 15 years’ imprisonment in 1988 for conspiracy to commit mail fraud and tax code violations, but continued his political activities from behind bars until his release in 1994 on parole.

In 1976 LaRouche ran for President of the United States.

Since the 1970s, LaRouche and his organization have been criticized by politicians, political writers and the Anti-Defamation League. The group has been called left-wings facists and also a fascistic cult. LaRouche himself has been accused of some pro-Nazi sympathies with a government style that would have corporations following LaRouche’s instructions.

Supporters have described him as the greatest living economist, and a political leader in the tradition of Franklin Delano Roosevelt and Martin Luther King. Critics have called him an extremist, a conspiracy theorist, a political cult leader, a fascist, and/or an antisemite. The Heritage Foundation has said that he “leads what may well be one of the strangest political groups in American history”.