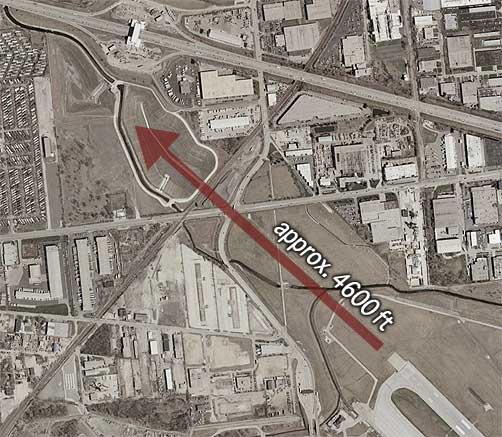 With the end of Runway 32R/14L in the lower right corner, the approximate flight path of American Airlines Flight 191 on May 25, 1979 at 3:04 p.m. is shown by the red arrow [MAP/SAT]. The crash site was in an empty field just south of the oasis on Interstate 90, just east of the Elmhurst Road entrance.

Memorial Day 2009 is also the 30th anniversary of the worst single-plane accident in the history of U.S. commercial aviation — the crash of American Airlines Flight 191 occurred just north of O’Hare International Airport. The American Airlines DC-10 crash of 1979 killed 271 on board (258 passengers and 13 crewmembers) and two on the ground.

There was no 9-1-1 (it was a seven-digit number) when American Airlines Flight 191 crashed just north of O’Hare International Airport on Friday May 25, 1979. Many people witnessed the crash or the immediate aftermath of the crash — a huge explosion that sent flames and smoke back up into the sky. Here are 13 people’s phone reports to the emergency number at Elk Grove Village Fire Department.

As a flood of phone calls hit the dispatch offices of local fire departments, especially Elk Grove Village Fire Department, the crew of Elk Grove Township Ambulance 321 was on the street and saw the ball of fire and huge plume of smoke. Here is the local suburban fire department radio traffic that followed …

When American Airlines Flight 191 crashed just north of O’Hare International Airport there were many witnesses to the smoke and fire that immediately rose from the crash site. Some fire units were already on the street and reported the unknown source of a huge fire and headed straight for the disaster scene.

EGRT … Elk Grove Township Fire Department is the fire protection district that was closest to the disaster scene, directly north of O’Hare International Airport. At the time of the crash, Elk Grove Township Fire Department was a brand new department. Ambulance 321 had not yet certified for Advanced Life Support at the time of the crash. That is probably why EGRT Ambulance 321 was calling for help requesting an MICU. In the early days of Emergency Medical Service (EMS), Advanced Life Support (ALS) ambulances staffed by paramedics were called Mobile Intensive Care Units (MICU).

EGRV — Elk Grove Village Fire Department was the next closest suburb to the disaster scene. EGRV borders most of the west side of O’Hare International Airport.