Comcast is offering faster speeds of up to 22 Mbps and 50 Mbps; but not without a few glitches in Arlington Heights, Illinois. Cables and amplifiers are aging equipment in Arlington Heights and they need to be replaced in order for Comcast to offer reliable high-speed Internet service to Arlington Heights residents. Comcast employees and subcontractors are working mostly during overnight hours and causing minor interruptions in Internet and television services. Some customers are noticing slower Internet speeds and cable modems requiring a reset. Total loss of television services has also been reported and also more frequent bursts of blank, static television screens are occurring as connections are replaced by line technicians.

The higher speeds have been available since last October. Last year line technicians were busy in yards after midnight in southern Arlington Heights. Currently in March 2009, they are working near Arlington Heights Road Oakton, on Dunton and on Waverly among several other areas. 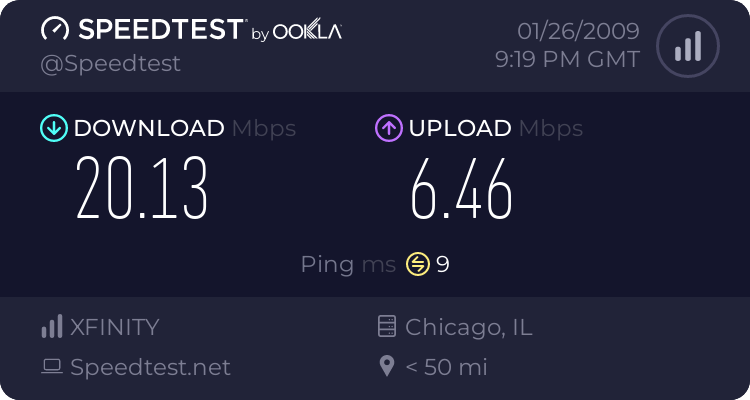 A speed test result for Ultra showing a 20Mbps downstream and a 6.5 Mbps upstream in late January 2009 in Arlington Heights, Illinois.

The new Internet services are priced as follows …
Extreme 50, offering up to 50 Mbps of downstream speed and up to 10 Mbps of upstream speed at $139.95/month.