To the south, Arlington Heights Road is a main arterial street that runs the entire length of Elk Grove Village to the Village of Itasca.

On westbound Interstate 90, a local/express split occurs just before Route 53 with express lanes in the center. 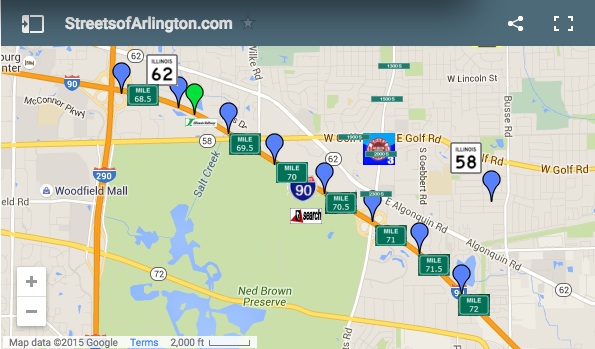 Interstate 90 (I-90) is the longest Interstate Highway in the United States at 3,101.13 miles and is the northernmost coast-to-coast interstate. The eastern terminus is at Route 1A near Logan International Airport in Boston, Massachusetts. The western terminus is at Edgar Martinez Drive S. near Safeco Field and CenturyLink Field in Seattle, Washington. Locally, Interstate 90 connects motorists from O’Hare International Airport, the northwest suburbs, and the far northwest suburbs to Chicago city neighborhoods on the northwest side and to downtown Chicago — especially via the Ohio feeder ramp. Mile Markers start at the Illinois-Wisconsin State Line and accumulate eastbound.

Jane Addams Memorial Tollway
Interstate 90 passes at the southern border of Arlington Heights and its full stretch through Arlington Heights is a tollway known as the Jane Addams Memorial Tollway — a 79-mile (127-kilometer) segment of Interstate 90 from Interstate 190 in far northwest Chicago to Illinois Route 75, one mile (1.6 km) south of the Wisconsin state line. The tollway was built in the late 1950s and early 1960s from the O’Hare area (at the Tri-State Tollway) to the Wisconsin state line north of Rockford, and was known as the Northwest Tollway until September 7, 2007.

Next West Interchange I-290/IL 53 (including an exit)
The next interchange to the west is a full cloverleaf interchange at I-290/IL53. Southbound I-290/IL 53 accesses eastern Schaumburg and Woodfield Mall, the western suburbs proceeding south to I-355, and to the City of Chicago and near west suburbs via eastbound I-290.

Access to northbound I-294 involves an exit ramp on the right immediately past the I-294 overpass.

There are two overhead oases on the Jane Addams Tollway—one at Belvidere, and one in Des Plaines near O’Hare International Airport.

From O’Hare International Airport to Huntley, the region along the sides of the Jane Addams Tollway is known as the “Golden Corridor”, due to the proximity of commercial and business activity located along the corridor in Northwest Suburban Chicago, including Des Plaines, Elk Grove Village, Arlington Heights, Rolling Meadows, Schaumburg, Hoffman Estates, Barrington, and Huntley. Several Fortune 500 companies, large malls, hotels, entertainment and exhibition facilities, restaurants, and retailers (including Woodfield Mall and Huntley Outlet Center) are located along the corridor, providing a “gold” mine of profit to communities along the Golden Corridor.

The “Kennedy Expressway” is named for the 35th U.S. President, John F. Kennedy.