Police firefighters and paramedics from Naperville responded about 10:31 a.m. Monday, March 1, 2021 a report of a passenger vehicle crash with a truck at the intersection of Route 59 and 103rd Street in Naperville. Police on arrival discovered a passenger vehicle and a semi-tractor trailer which appeared to be involved in a rear-end collision.

The vehicles involved in the rear-end crash were a silver 2007 Ford Fusion and an orange 2002 Volvo semi-trailer truck. The Naperville Fire Department responded to the scene and assessed the driver of the Ford, who was declared deceased at the scene. The victim then extricated from the vehicle at a later time. The identity of the driver was initially withheld pending notification of next of kin. The driver of the semi, a 58-year-old Plano resident, suffered minor injuries and was transported to the hospital.

Traffic Crash Reconstruction Specialists from the Naperville Police Department’s Traffic Unit were assigned to the scene to investigate.

Preliminary investigation indicated the driver of the Ford Fusion collided with the rear of the Volvo semi-tractor trailer in the northbound lanes of Route 59 approaching 103rd Street.

During the course of the investigation, a secondary traffic crash occurred involving a passenger car and a school bus in the southbound lanes of Route 59 north of 103rd Street. The secondary collision was not related to the initial collision being investigated. There were no students on the bus and the involved parties all refused medical treatment.

Initially no charges or citations were issued. The intersection was closed for an extended time period, and the crash remains under investigation following the on-scene investigation. Anyone who may have witnessed the crash or has any additional information is asked to contact the Naperville Police Department Traffic Unit at 630-305-5477. 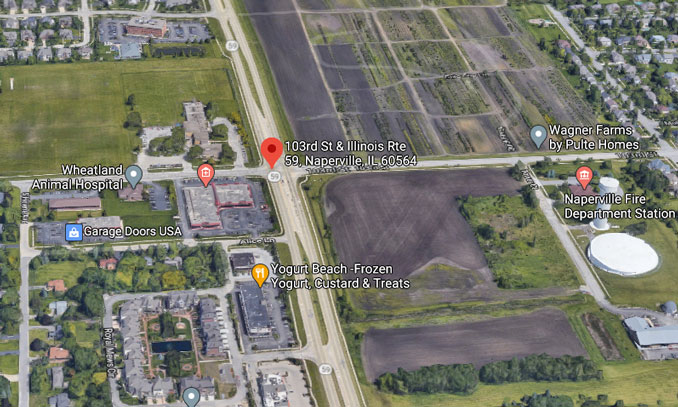