On Sunday, May 23, 2010, a friend, Jennifer Wyatt (aka Jennifer Wyatt-Paplham), reportedly dropped off Beth Bentley at an Amtrak Station in Centralia, Illinois after a “secret” weekend trip that started as a car trip from Woodstock to Mount Vernon, Illinois — east of St. Louis. Bentley was reportedly taking a 6:00 p.m. train back to her home located in Woodstock, Illinois. Bentley did not return home and was reported missing. Police investigators noted that neither Amtrak personnel nor Amtrak passengers recalled seeing Beth Bentley on the Amtrak train.

Wyatt said she dropped off Beth Bentley across the street from the Amtrak station in Centralia. Wyatt said Bentley planned to meet an unknown male friend from St. Louis before returning home to Woodstock on her own. Wyatt said that was the last time she saw Bentley.

None of Bentley’s bank accounts were used, and her cellphone could not be detected on the wireless network of her service provider. When she was reported missing, Beth Bentley was a 41 year-old mother of three children.

Woodstock police suspected Wyatt spoke with Bentley on Tuesday, May 25, 2010 and accused Wyatt of lying about dropping off Bentley at the train station on the preceding Sunday. In March 2012 Wyatt was charged with Obstruction of Justice, but the charges were dismissed in court by the a judge

In August 2017, Beth Bentley’s husband, Woodstock local attorney Scott Bentley, filed a request in McHenry County court to have his wife presumed dead. Information about the probate case was sealed and not accessible to the public per judge’s order. The Illinois State Police agreed to share information with attorneys with the understanding that documents would be shielded from public view.

Information was developed which led the ISP to a rural location in Jefferson County where suspected human remains were recovered at the location on December 4, 2017.

Centralia, Illinois is located in Jefferson County and also Marion, Clinton and Washington counties, about 300 miles south of Woodstock, Illinois.

The results of the joint investigation conducted by the ISP Zone 7 Investigations, ISP Zone 1 Investigations and Woodstock Police Department (WPD) have been forwarded to the Jefferson County State’s Attorney’s office for review.

According to the Illinois State Police, no further information will be available from the ISP. 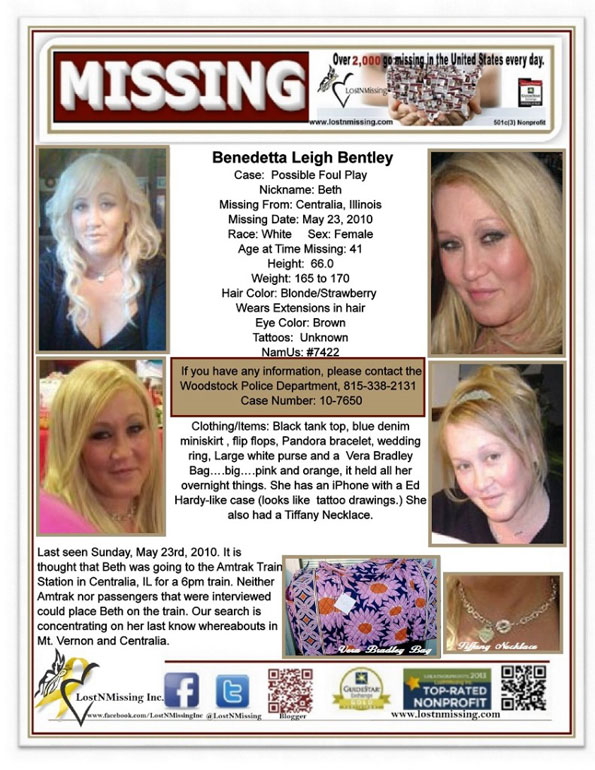