Buffalo Grove police and firefighter paramedics responded about 2:08 PM Saturday, July 20, 2019 to a report of a crash with entrapment at Buffalo Grove Road and Dundee Road. No driver’s were entrapped. In fact the suspected motorist that caused the crash fled on foot — possibly southbound through a residential neighborhood and past Nino’s Pizza.

Police and firefighter/paramedics on arrival discovered a Jeep Grand Cherokee off the road under a pole and power lines on the eastbound side of Dundee Road west of Buffalo Grove Road.

Witnesses said the driver of the Jeep Grand Cherokee fled the scene on foot, and possibly ran southbound from the scene. No description was available for the fleeing driver.

Initially no injuries were reported and there were no medical transports by paramedics. Another Jeep Wrangler type vehicle headed westbound on Dundee Road was hit by one or more of the downed lines that fell across Dundee Road as the crash occurred. The black Jeep was not involved in any crash with any other vehicle.

Power lines fell across the Dundee Road and were hit by a westbound black Jeep Wrangler type vehicle.

Buffalo Grove police and area police were searching for the driver.

After a minor power outage, Nino’s will be closed for the rest of the evening, Saturday, July 20 and will re-open on Sunday, July 21 — normal business hours will apply.

We apologize for this inconvenience and we look forward to seeing you tomorrow !!!

Come show us how much you love Nino’s Pizzeria.

Nino’s, the popular pizzeria on Buffalo Grove Road, was able to complete at least some catering deliveries and pickups, but was unable to complete new orders because they had no electricity. At 5:39 p.m. Nino’s announced on their Facebook page that they had to close for the rest of the evening, and that they looked forward to opening for normal business hours on Sunday.

Fortunately moderate thunderstorms spread out the cooler air of an outflow boundary that crossed Nino’s patio deck at 3:37 p.m. — affecting most of Buffalo Grove about the same time. The air temperature suddenly dropped almost 20°F. Chicago Executive Airport reported a drop from 96°F to 77°F by 3:52 p.m. 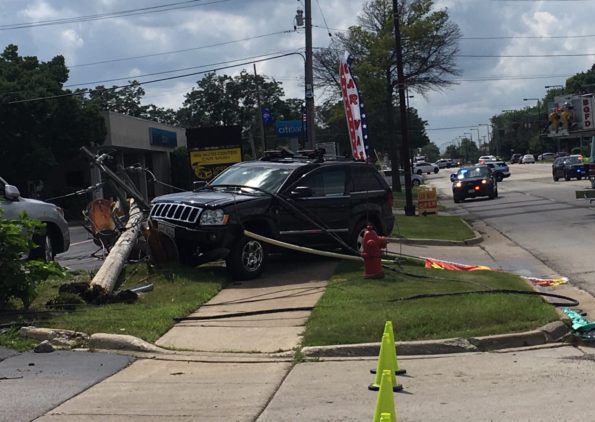