There have been discussions for years of placing a menorah at the site of the North School Park holiday displays, but 2018 marks the first year that a menorah is lit in the park. Members of a new Arlington Heights-based synagogue, Chabad Jewish Center of Arlington Heights, helped celebrate the Festival of Lights by lighting a six-foot nine-lamp Hanukkah (Chanukah) menorah at the northwest corner of North School Park on Tuesday night, December 4, 2018.

“The miracle and message of Hanukkah — increasing the light and adding more love to the world — wouldn’t be good enough to keep in our own homes. It’s important to bring this message to the world.”

Hanukkah (also commonly spelled Chanukah) is a Jewish festival commemorating the re-dedication of the Second Temple in Jerusalem at the time of the Maccabean Revolt against the Seleucid Empire and the Hellenistic influence on Jewish life — a Jewish rebellion, lasting from 167 to 160 BC. Hanukkah is also known as the Festival of Lights. Traditionally on each night of eight-day holiday of Hanukkah a new branch is lit. The ninth holder, called the shamash (“helper” or “servant”), is for a candle used to light all other candles and/or to be used as an extra light. Hanukkah 2018 began the evening of Sunday, December 2 and ends in the evening of Monday, December 10.

The display represents the first public menorah installed in at North School Park during the period of holiday displays. Also in the northwest corner is a Christian Nativity scene and a display commemorating the United States Bill of Rights, freedom and the separation of Church and State set up by the Freedom from Religion Foundation (FFRF). To date the FFRF has not set up a red ‘A’ as in previous years. Instead, the display represents United States Early American figures and the Statue of Liberty. The remainder of the entire North School Park is lit annually on Friday night after Thanksgiving with a Christmas tree (holiday tree) and other traditional holiday or Christmas displays.

The menorah lighting is one of the first public outreach efforts of the new Jewish center, which is currently using a home for a meeting place on Fernandez Avenue near Palatine Road and Fernandez Avenue. About 10 families began gathering for services and study groups in November 2018. The Chabad Jewish Center of Arlington Heights is searching for a permanent location in a commercial area.

Founding father of the Covenant, the special relationship between the Jewish people and God (Judaism);

Prototype of all believers, Jewish or Gentile (Christianity);

The menorah is among the most widely produced articles of Jewish ceremonial art. A seven-branched menorah and the Star of David are traditional symbols of Judaism — the monotheistic, Abrahamic religion of Jewish people. The major Abrahamic religions in chronological order of founding are …

Judaism in the 7th century BCE,

Christianity in the 1st century CE, and

Islam in the 7th century CE. 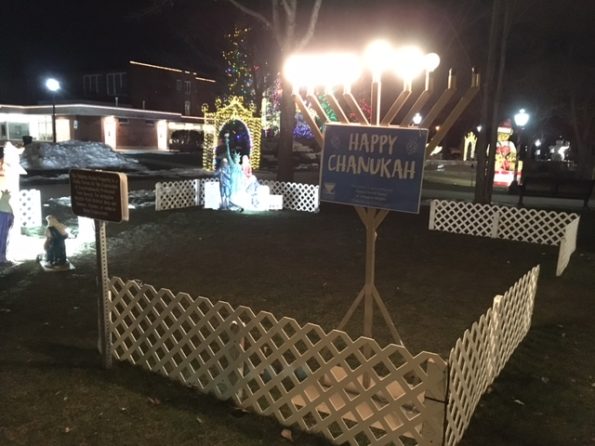