George Herbert Walker Bush, who as the 41st president has died at the age 94. A statement from former President George W. Bush (#43) reads: “Jeb, Neil, Marvin, Doro, and I are saddened to announce that after 94 remarkable years, our dear Dad has died. George H. W. Bush was a man of the highest character and the best dad a son or daughter could ask for. The entire Bush family is deeply grateful for 41’s life and love, for the compassion of those who have cared and prayed for Dad, and for the condolences of our friends and fellow citizens.”

Bush, a World War II naval pilot who survived being shot down, was the father of the 43rd president, George W. Bush.

The nation’s 41st president had been receiving calls and relaxing at his seaside home in Maine eight days after being released from a hospital where he was treated for hypotension (low blood pressure).

George H.W. Bush became the first former U.S. president to turn 94 on June 12, 2018. Bush’s office shared a letter from the president that stated …

“As many of you know, for years I have said the three most important things in life are faith, family and friends. My faith has never been stronger.”

Bush, a Republican who served as Vice President under President Ronald Reagan for two terms, was elected President in 1988. Bush beat Democrat Michael Dukakis in an electoral landslide and with 54 percent of the popular vote.

In his inaugural presidential address, Bush spoke of “a thousand points of light” across the country, community organizations that were doing good and with which he promised to work. He pledged in “a moment rich with promise” to use American strength as “a force for good.”

His public approval rating soared to 89 percent during his presidency when a US-led coalition of 32 countries routed Saddam Hussein’s Iraqi army out of Kuwait in 1991.

After signing a strategic arms reduction agreement to reduce nuclear weapons with the Soviet Union’s Mikhail Gorbachev, Bush accomplished a second agreement with Russian President Boris Yeltsin in January 1993 after the USSR collapsed.

Bush said in his final State of the Union address. “But the biggest thing that has happened in the world in my life, in our lives, is this: By the grace of God, America won the Cold War.”

His strength in foreign policy wasn’t enough to lead him to two terms as President. The unemployment rate, at 5.3 percent during his first year in office, rose to 7.4 percent in 1992. After A campaign promise statement that said, “Read my lips: no new taxes,” he was forced to raise taxes anyway because of a rising deficit. In his final year in office his approval rating dropped below 50 percent.

He lost re-election to a second term to Bill Clinton in 1992, but his son George W. Bush won the presidency in 2000 after Clinton’s two terms, beating Clinton’s Vice President Al Gore. 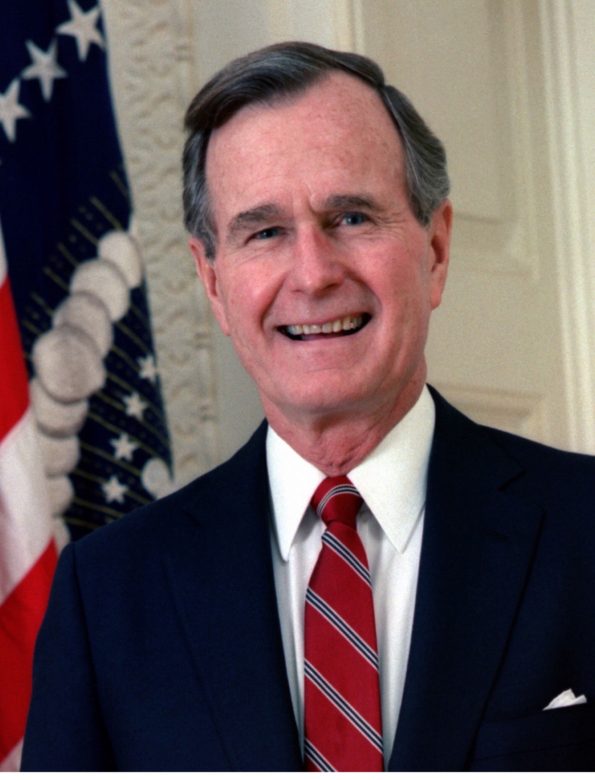