Four people are reported dead after Chicago police, firefighters and paramedics responded about 3:20 PM Monday, November 19, 2018 to the scene of an active shooting at Mercy Hospital and Medical Center at 2525 South Michigan Avenue. Witness reported the shooting started in the parking lot and then the exchange moved into the hospital.

A Chicago police officer was killed in the line of duty when he responded with other police officers to save peoples’ lives and suppress the shooter. The officer, identified as Samuel Jimenez, was 28 years old and had just completed his probationary period. Jimenez leaves behind a wife and three kids. The police officer was initially listed in critical condition at the new Level I Trauma Center at University of Chicago.  Witnesses on the scene had reported CPR being administered to a police officer as he was taken out of Mercy Hospital into CFD Ambulance 41 for transfer to University of Chicago.

Using a handgun, the shooter shot his ex-fiance, an ER physician who was leaving work. As reported by a witness, the shooter had asked Dr. Tamara O’Neal to return an engagement ring, and then shot her 5-7 times in the west parking lot of Mercy hospital.

During exchange of gunfire in the east lobby of the hospital, Officer Samuel Jimenez was shot and killed by the shooter, tentatively identified as Juan Lopez, age 32. The shooter was found dead with a gunshot wound to the head. Initially it was unknown if his gunshot wound was self-inflicted or the result of the exchange of gunfire with the police.

Also killed during the exchange of gunfire was Dayna Less, age 25, a hospital pharmacist, who had just graduated from Purdue University, and was getting off an elevator inside the hospital when she was hit.

Chicago police Supt. Eddie Johnson and Mayor Rahm Emanuel talked about the fatal shooting at Mercy Hospital where four people were killed, including a Chicago cop, ER doctor, a pharmaceutical assistant and the gunman. 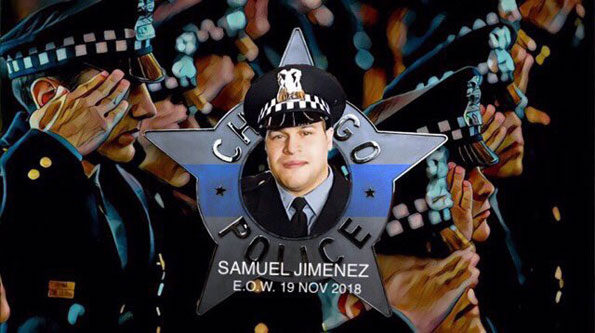 Procession for Chicago Police Officer Samuel Jimenez, who was killed while responding to the shooting at Mercy Hospital.