Flames broke out at a suburban condo complex, burning home after home for several hours Wednesday. Firefighters worked for eight hours to put out the extra alarm fire, and said they would continue working throughout the night (CBS Chicago).

There were four connected buildings at 648 McIntosh Court (satellite view below). The fire started on the north end in the second building from the south. Firefighters on arrival, just after 1:22 p.m. Wednesday, July 18, 2018, reported fire showing from the second floor. Video from ABC 7 Chicago below shows smoke coming from second floor openings, and flames extending to the third floor mansard roof before exterior firefighters set up at the back of the building. The fire is believed to have started on the second floor. Next, the fire spread to the building to the north, and then the building to the south. The building furthest to the north, among the four buildings, did not show any visible signs of fire from the outside throughout the afternoon and night.

While responding, Prospect Heights firefighters reported seeing a smoke header and called for a Working Fire response. Firefighters on arrival reported fire showing from the second floor. Next, the fire broke out through the mansard roof on the third floor, and quickly spread southward in the building’s attic and roof. Interior firefighters were ordered to evacuate, and the horns on fire engines and fire trucks were sounded to help with notification so that all firefighters were evacuated. A Box Alarm was activated, and eventually the response was elevated to a 5th Alarm with two Special Alarms with unconfirmed statistics of 50 fire agencies on the scene or in staging nearby.

Video of the initial minutes of firefighting at the original fire building, where the fire quickly jumped from the second floor into the third floor, and then spread south along the attic of the building. Evacuation tones (horns) are heard just after 8:00 minutes elapsed time (YouTube/SSResquire).

The Prospect Heights aerial stream would eventually pivot, working the main fire building, the near-north building, and the south building.

The early report was that one firefighter and two civilians suffered minor injuries. Several pets were reported missing or presumed dead in the fire. The 50 year-old complex did not have a sprinkler system. 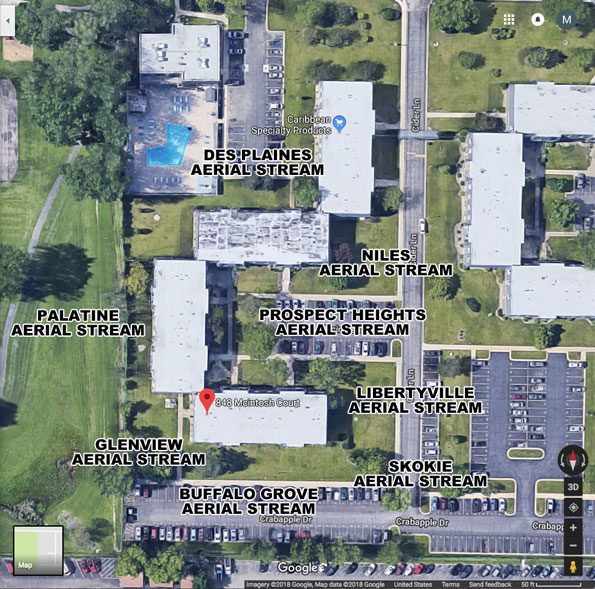 Hundreds of people have been displaced by a massive condominium complex fire in northwest suburban Prospect Heights Wednesday. Video at elapsed time of 1:19 show smoke coming from second floor openings and flames extended to the third floor mansard roof before firefighters set up at the back of the building (ABC 7 Chicago).