Chicago Police released body cam video within 24 hours after he was shot, seconds after he was combative with police, after he revealed a weapon holstered on his right hip, he appeared to draw his weapon from his holster as he hurried away from police.

According to Chicago Police Department, officers on foot patrol in the block of 2000 East 71st Street stopped 37-year-old Harith Augustus about 5:30 p.m. Saturday, July 14, 2018 to question him about a “bulge around his waistband” that suggested he was armed. Either Augustus or a police officer pulled up his shirt during the confrontation, which revealed his abs, a holstered handgun on his right hip, and what appeared to be an ammunition clip near his left hip. He retreated from police officers, who were standing on the sidewalk. He headed toward the street appearing to reach for the weapon on his right hip. As a Chicago Police SUV pulled up to the scene, Augustus appeared to reach for his gun one last time before he was shot by police, who were still standing on or near the sidewalk Police report that after Harith Augustus broke free from the officers, he “appeared to be reaching for a weapon,” so he was shot.

Video of confrontation between police and Mr. Augustus at 71st and Jeffery. pic.twitter.com/Qd9q9IXNdS

Also Sunday afternoon, Chicago Police Department Supt. Eddie Johnson said Augustus’ family saw the video before it was released, adding police released the video in response to information that was spreading about the incident online. The release of the body cam video was the quickest release of any body cam video to date. Johnson also answered press questions about the incident.

“The community is also hurting and I promise that CPD will be as transparent as possible. The community needs some answers and they need them now. I think that narrative that was out there that he was an unarmed individual, I think it’s our responsibility to let people know what actually occurred so they don’t go out there uneducated about what happened.”

Johnson said the police officer involved in the shooting was a probationary officer who recently completed field training. He has been placed on the standard 30-day administrative duty following a police-involved shooting while the Civilian Office of Police Accountability (COPA) investigates the shooting.

Supt. Johnson also said that initial investigation — checking “every database” — has not discovered any association of Augustus with a Concealed Carry Permit.

Augustus was not a known gang member and had no recent criminal history or arrest history. Police found a handgun and two magazines of bullets at the shooting scene and sent them for testing.

Sunday afternoon the Cook County Medical Examiner’s Office released the cause of death of Harith Augustus as multiple gunshot wounds.

BREAKING: Another image from CPD body cam video from Saturday's deadly shooting. This is of the man who was shot, Harith Augustus https://t.co/V45iuP0Kkl pic.twitter.com/EUJPg4nSxv 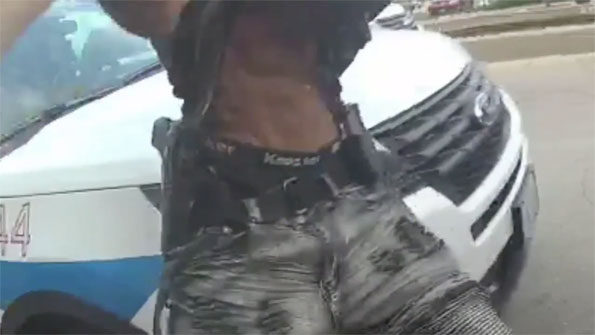