On Thursday, April 5, 2018 Jacob Beeman, of Arkdale, Wisconsin, pleaded guilty and was sentenced to 41 years in prison by Cook County Judge Steven Goebel for a Buffalo Grove home invasion and stabbings that occurred on about 12:09 AM Wednesday, August 10, 2016 on St Mary’s Parkway in Buffalo Grove. The stabbings committed by Jacob Beeman seriously injured the 47-year-old homeowner, Edward Panzek; his teenage son; a teen female family friend; and the family’s German Shepherd dog. Two other people in the house escaped injury by locking themselves in the father’s room and escaping the house out a window. Judge Steven Goebel said he was “shocked and appalled by the violence and viciousness of this act. The sentence in this case must be severe.”

Judge Steven Goebel told Beeman that the Buffalo Grove home invasion victims will have to live with the trauma for the rest of their lives because he made a mistake while under the influence of drugs.

“You mistakenly thought the family members were drug dealers you were going to rob,” Goebel said. “You blame your actions on drugs and being high. That’s no excuse.”

In court, Assistant State’s Attorney Kristin Piper said Panzek family members and a female friend were playing video games in the son’s bedroom. Shortly after midnight, Beeman, wearing a bandana over his face, kicked in the window air-conditioner in the room, crawled partly through the window and brandished a knife, according to Kristin Piper. He exited the window and headed for the front door.

Beeman then kicked in the front door and was attacked by the family’s dog, according to Piper. Beeman stabbed the dog and then stabbed Panzek as he tried to confront him, but Panzek ran for his handgun, stored in a safe, as Beeman chased Panzek’s son and stabbed the son and his female friend. Upon seeing the handgun, Beeman fled. Seriously wounded, Panzek was still able to fire one shot as Beeman fled the home. The shot missed. The stabbing injuries caused Panzek to lose 50 percent of the function of his arm.

Beeman, a 31-year-old Wisconsin resident with pending criminal cases there, was arrested a short time later at a nearby gas station in Wheeling, carrying black gloves, bandanas and a bloody hunting knife in his boot. Cook County prosecutors charged him with numerous counts of attempted murder, home invasion, aggravated battery and aggravated cruelty to an animal.

Beeman has been in custody since his arrest, and will be required to serve at least 85 percent of the sentence under state law. Local prosecutors said Beeman still has a case pending in Wisconsin in which he was accused of slashing a police officer’s face.

A second masked suspect, who did not enter the home and was seen outside the home, did not face any charges.

All victims were seriously wounded, but all survived, including the dog, Piston. 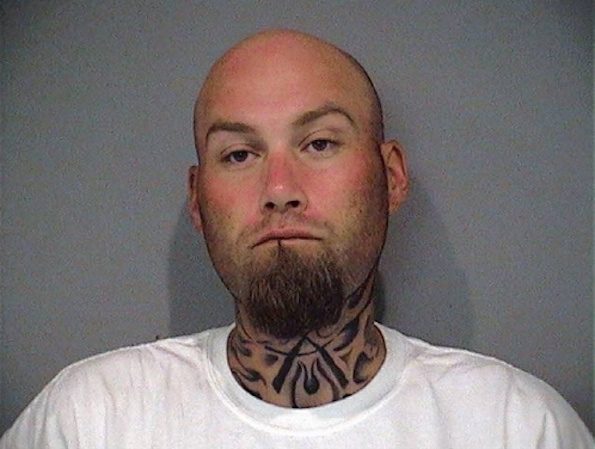 VIDEO: Crime scene at home where four people were stabbed on St Marys Parkway near Lincoln Terrace in Buffalo Grove just after midnight.