Trump says Amazon is killing Mom and Pop retailers, but Stuart Varney says it was Walmart that closed down Main Street a generation ago.

Varney says it’s Amazon CEO Jeff Bezos’ ownership of the Washington Post, which he says is the most virulent attacker of the Trump administration, that might be the impetus for Trumps attacks on Amazon.

Product Quality is what is hurting all of our industries. I am a clothes hog. And a shoe hog. But all I can find is crap. CEOS decided that people of my income level only get polyester and pleather. Screw that. That’s the demise of the Mall, not Amazon.﻿

Former Walmart CEO Bill Simon says Amazon has operated their retail business at a loss for 20 years, but subsidizes the online sales business with the profits from Amazon web services. Simon says Amazon is putting retailers out of business, citing JC Penny and Toys ‘R’ Us as examples.

Kevin O’Leary thinks that Jeff Bezos should have considered the repercussions involved in buying a liberal newspaper. O’Leary doesn’t think the board at Amazon is very happy with the situation. 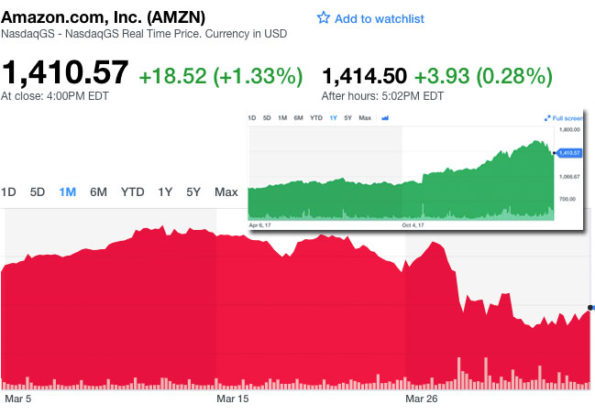