Three people aboard a private, adult-themed “Distinguished Gentleman” entertainment bus were fatally shot early Saturday morning in Rockford by a shooter that was not initially described by police.

Rockford police and firefighter/paramedics responded about 3:25 a.m. Saturday April 7, 2018 to the block of 400 North Springfield Avenue near School Street to a report of a shooting. The driver of the “Distinguished Gentleman” adult entertainment bus said he drove a short distance from the shooting site into the fuel lane of a gas station. Rockford police say the actual shooting location was reported to be Auburn Street and North Johnston Avenue. The shooting is reported to have occurred while the bus was traveling. The passengers fled on foot, but the driver of the bus kept traveling to the gas station.

Rockford, Illinois police say that three people were fatally shot early Saturday on a private adult-themed charter bus, and an ongoing search continues for suspect 22 year-old Raheem D. King — the man charged in connection with the shooting deaths of three passengers on the party bus. Police said Raheem D. King was armed with an assault rifle, and shot three men, who were passengers on the bus.

The Winnebago County coroner on Monday April 9, 2018 identified the victims as three Rockford men, who were found by police dead at the scene …

The Rockford Police Department says Raheem D. King was on the bus with the victims at the time of the shooting, and that an arrest warrant was issued for King by the Winnebago County State’s Attorney’s Office. The bus was rented by private citizens 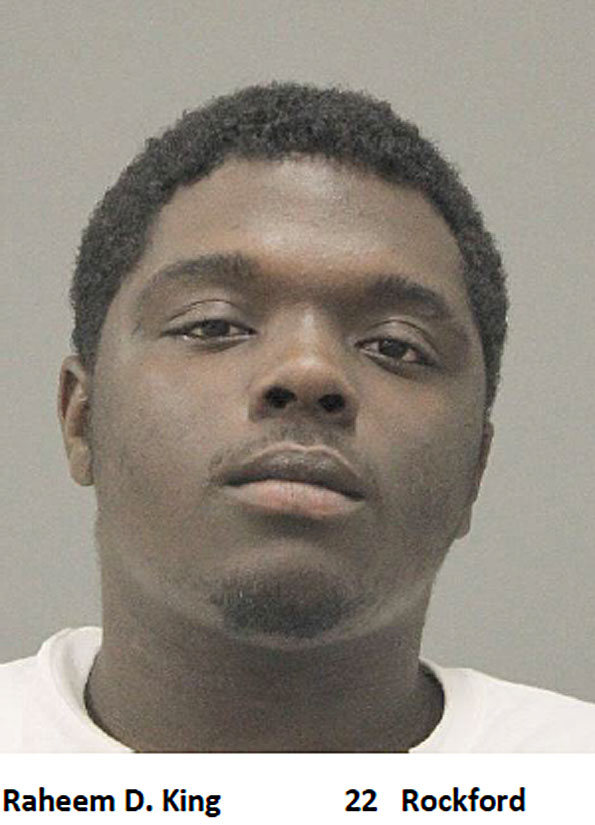 Police Chief Dan O’Shea said Saturday morning that the driver of the “Distinguished Gentleman” bus called police about 3:25 a.m. The driver had driven a distance from the shooting site and parked in a fuel lane at a service station where he met with police.

Initially O’Shea said that “a suspect on the bus shot other individuals on the bus” and no description of the suspect was announced. Also, initially police said the victims had not been identified.

The Winnebago County Coroner’s Office is continuing the investigation, and on Saturday afternoon April 7, 2018, a SWAT team with an armored vehicle surrounded a home on Day Avenue near North Horace Avenue. Police were executing a search warrant connected to the bus shooting, but did not reveal whether the target of their search warrant was acquired.

Heavily armored Rockford police officers in the armored trucks leave after executing a search warrant on Saturday, April 7, 2018, at a home on North Horace Avenue and Andrews Street in Rockford.