A fire department tradition that goes back to the days of horse-drawn fire engines in the late 1800s was brought to life Monday April 16, 2018 at Schaumburg Fire Department Station 55.

The celebration of the arrival of a new piece of fire apparatus has been a source of pride for fire departments for more than 100 years. Wet downs are characterized by a dedication and a ceremonial wet down from a small hose line from the fire engine that is being replaced, anointing the new fire engine. Once the fire engine is dried off, all firefighters and guests participate in the signature event: the push-in to the firehouse. Some adjustments were made because of the unseasonably cold April weather, so the wipe down and sprinkling of Holy Water occurred after Squad 55 was pushed into the fire station at 716 South Plum Grove Road Monday, April 16, 2018, just after 10:00 a.m.

Several fire officers, police and fire commissioners, members of the public and children got a chance to hose down the new Squad, which is a highly capable and well-prepared rescue squad ready to respond to crashes (especially on nearby expressways and the I-90 tollway), fire calls, hazardous materials calls and other emergencies. Squad 55 is part of a dual rig unit, paired with Squad 55A. Squad 55 usually responds to all major calls, while Squad 55A responds only to more specialized emergencies. Therefore Squad 55A has less mileage than Squad 55, which needed a replacement. The older Squad 55 is going to be placed in reserve.

Schaumburg Fire Chief James G. Walters led the dedication ceremony, and explained the tradition to guests at the fire station.

Battalion Chief Richard Anderson helped organize the ceremony and get the invitations out to the community. During the wet down with the hose line, several of the older fire officers were teased by other firefighters as they had not handled a hose line in years or decades.

Police and Fire Commissioner Pete Justen sprinkled Holy Water from St. Marcelline Catholic Church, accompanied by Lt. John Brohan and Firefighter/Paramedic Pat Lahey, and gave a blessing to the new Squad, saying “Thank you Father, we thank you for bringing us this equipment … thank you for the village. May the Lord be above us to protect us, below us to support us, in front of us to guide us, and behind us to protect us, and alongside us all the rest of our lives. Amen.”

Schaumburg Firefighter/paramedic Pat Lahey, who was instrumental in the design of the squad and customized the final touches and adjustments for Squad 55, gave the tour of Squad 55 to retired Carol Stream Fire Chief Rick Kolomay that Arlington Cardinal caught on video. 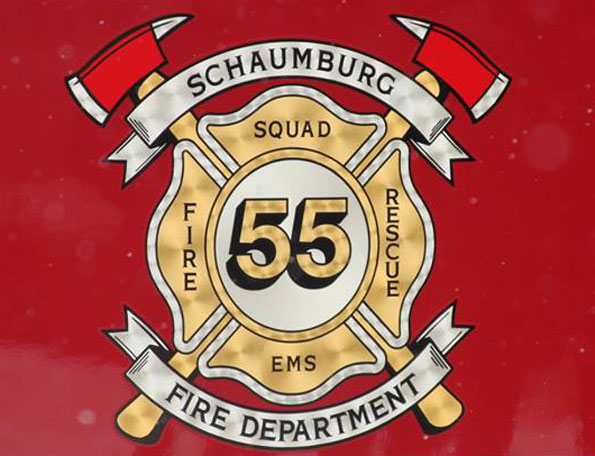