Jacksonville Power Sports initially got a ticket — cited for military flag display, but the City of Jacksonville has backed down on the citation after a viral response to video the business posted about their “violation.”

A lot of people probably think Fox News makes up these kind of stories that are presented almost weekly on the cable news network, but this week the following news of anti-patriotism was broadcast by the business (victim) on Facebook live.

A man named Shaun, representing Jacksonville Power Sports, expressed frustration on a Facebook Live video, stating that the business was given a ticket and was asked to take down the flags. Additionally, city compliance enforcer Melinda Power behaved disrespectfully toward a customer — a veteran who was in the store.

Katie Klasse, a store employee, recounted what happened when the customer, who is a veteran, got upset with Melinda Power. Klasse said, “She [Melinda Power] says ‘What did you do for this country?'”

Klasse added, “He [veteran/customer] says ‘I took three bullets to the leg. I almost lost my life for this country. I’m retired. I’m a veteran.’ She gets in his face this close and says ‘You did nothing for this country.'” 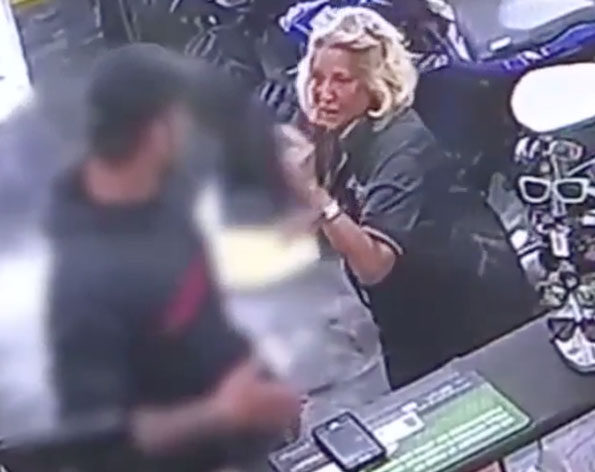 The mayor of Jacksonville, Florida responded to viral outrage after the citation incident at Jaguar Power Sports. Curry said on Twitter that he “directed city staff that military flags should be treated same as US flag. Let them fly. I Have reached out to the business owner & will review employee procedures. COJ employees r expected to be respectful of our customers – you, the people of Jacksonville.”

He added, “We support our military and veterans, and we appreciate businesses who honor their service.’

1. I Have directed city staff that military flags should be treated same as US flag. Let them fly. I Have reached out to the business owner & will review employee procedures. COJ employees r expected to be respectful of our customers – you, the people of Jacksonville.

2. We support our military and veterans, and we appreciate businesses who honor their service.

“We cater to our men and women, both retired and active military, so it was personal. We felt like it was a personal attack,” the store’s sales manager, Marcy Moyer, told WJXT.

Jacksonville, the County Seat of Duval County, is the most populated city in Florida, and is the largest city by area in the contiguous United States.

OUTRAGED VETERANS | A local store was issued a citation for flying military flags on its roof. Click on link to see how Jacksonville Mayor Lenny Curry responded — https://t.co/XxJDHaIFWv pic.twitter.com/XIjlJI0SDt

“Employees of the City of Jacksonville are the servants of taxpayers who have a duty to enforce our laws and regulations. I expect every one of them to do that job in a manner that is respectful and reflects the privilege we all have to serve this great city. What I saw reported is 100 percent inconsistent with how I expect every city employee to interact with our citizens.” I have ordered a review of the actions of the employee and pending the completion of that review, the employee and her supervisor have been placed on leave. Today I will ask every manager of city departments to review our procedures with each city employee. Once a review of the actions in this matter is complete, appropriate corrective action will be enforced for any wrongdoing.

As the son and grandson of military veterans, and the mayor of a city with a proud history of commitment to our nation’s defense, I will not tolerate disparagement or disrespect of the men and women who serve or served. On behalf of the City of Jacksonville I apologize to veterans and service members who are rightly troubled by the events that have been reported.

While current ordinance does not address residents or businesses displaying military flags, I will not allow any citation of those who demonstrate their support for the Armed Forces. My team is working with the city’s Office of General Counsel to bring clarity to the relevant city laws.”