Zion announced yesterday that a 34-year-old Kenosha, Wisconsin man was arrested earlier this week in connection with a fatal hit-and-run on Saturday October 21, 2017 about 12:50 a.m. when young men were struck outside a Zion subdivision. The collision killed Randall Lee Harrison, age 19, of Pleasant Prairie, and injured his friend, who was treated at Vista Medical Center East in Waukegan and released.

The vehicle suspected of being involved in the hit-and-run was captured on surveillance video, and then discovered by investigators on the surveillance video. Investigators matched a vehicle on video based on the initial description at the scene as a 2004-2006 silver Chrysler Sebring convertible. The vehicle and driver were wanted for investigation in connection with the fatal hit-and-run.

The Chrysler Sebring convertible was captured on surveillance video about a half mile south of the hit-and-run scene at the Tobacco Outlet, Route 173 and Green Bay Road, where the driver pulled into the parking lot after the incident, police said.

According to Zion police, video evidence showed a white male driver, who was wearing a black T-shirt, pull off of Green Bay Road at Route 173. The driver put the vehicle’s black convertible top up and possibly remove evidence from the scene. The Sebring suffered damage to the front end and hood.

On October 30, 2017, Zion police reported that officers were able to find the vehicle involved in the accident, but could not say where the vehicle was recovered because of the ongoing investigation.

According to the Zion Police Department, Dennis C. Russell was being held Tuesday, March 20, 2018 in the Kenosha County jail pending extradition to Lake County. 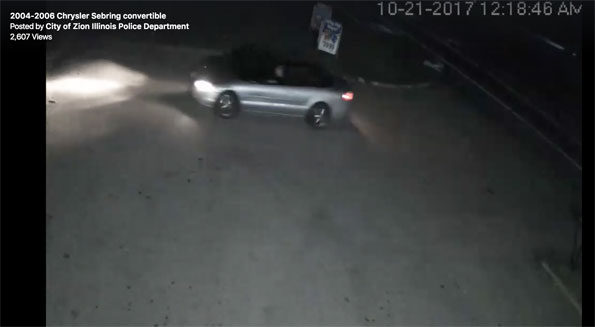 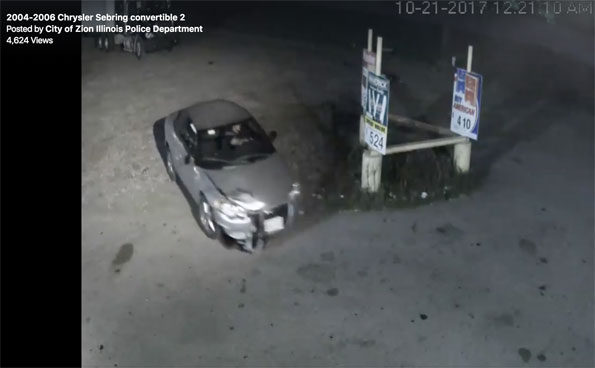