A Chicago firefighter is listed in serious-to-critical condition at Mount Sinai Hospital after being transported in life-threatening condition a from an apartment fire scene on Saint Louis Avenue, according to the Chicago Fire Department.

Chicago police and firefighter/paramedics responded about 8:47 AM Saturday March 3, 2018 to a report of a 2-flat apartment building fire at 1921 S Saint Louis Ave Chicago, Illinois.

The first engine crew on arrival reported a 2-story ordinary apartment with a fire.

Truck 32’s crew report they were at the front of the building with a fire by 8:49 AM.

Battalion Chief 14 reported a 2-story ordinary apartment building, 25×35, with a fire on the second floor. Companies were leading out with a hose line, and raising an aerial to the roof by 8:50 a.m.

Engine 107’s crew was assigned to go to Trumball in the rear of the building on fire.

An exposure building was reported on fire at 1917 S Saint Louis Ave, and a Still and Box was requested at 8:52 am. on orders of Battalion Chief 14.

A firefighter down report was alerted with a MAYDAY and EMS Plan 1 by 9:00 a.m. There was a report that a firefighter was down on the second floor. The firefighter was quickly brought down the stairs for medical treatment of a life-threatening condition.

The safety of all other firefighters was confirmed, and the Chicago firefighter was already on the way for transport to Mount Sinai Hospital by 9:11 a.m.

The MAYDAY was secured by 9:12 AM, but the EMS Plan 1 remained active. All Chicago Fire Department members were accounted for by PAR, and the injured firefighter was en route to Mt Sinai. 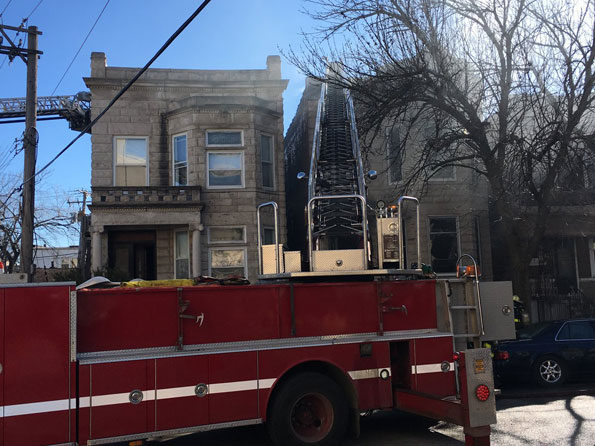