Austin, Texas police chief Brian Manley says the suspect in a string of bombings in that city is dead, and that the suspect blew himself up in his vehicle on Wednesday morning as officers approached. (March 21)

The Austin serial bombing suspect is reported killed by his own detonation of an explosive in his car on I-35 in Round Rock, Texas near a Red Roof Inn. Southbound I-35 is closed at Old Settler’s Boulevard and backed up past University Boulevard. Northbound traffic on I-35 was moving normally at 4:00 a.m. At 4:15 a.m. southbound I-35 traffic was backed up to Westinghouse Road, and a secondary road closure was established at University Boulevard. The crime scene is about 18 miles north of Austin, Texas.

Initially, a police-involved shooting was reported near the Red Roof Inn between Old Settler’s Boulevard and Bowman Road — just north of Round Rock, Texas.

The location is near the crime scene where a suspicious package was found Tuesday night in Pflugerville, which is also north of Austin, Texas.

Federal K9 units are on the scene, and the suspect may have detonated a bomb at the scene of the suspect’s shooting death.

The Austin Police Department tweeted at 12:46 a.m. that they are working an officer-involved shooting in the 1700 block of North I-35.

Just got to scene. This is in Round Rock (north of Austin). Police all over in front of two hotels. Traffic stopped on southbound I-35. #AustinBombings suspect reportedly was in a shootout w/ police and has been killed. pic.twitter.com/B1aeVJsTNB 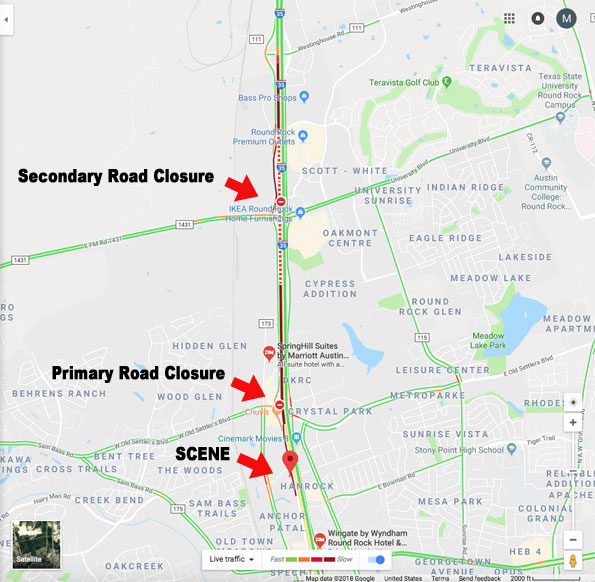 Round Rock I35 Serial Bomber Road Closures and Crime Scene.