Our thoughts and prayers are with the family, friends and colleagues of CPD District Commander Paul Bauer, who was fatally shot this afternoon at the Thompson Center in the Loop. https://t.co/q936eRhbCK pic.twitter.com/0yC8lTqVJt

Commander Bauer — a 31-year veteran of the Chicago Police Department — was off-duty when he heard on a police radio channel the description of a suspicious suspect that had fled from a tactical team. The tactical team was possibly investigating an attempted robbery at a nearby Starbucks.

Bauer sighted the suspect matching the description about 2:00 p.m. Tuesday, February 13, 2018. An altercation with weapons occurred, and Bauer was mortally wounded. The high ranking police officer from the 18th District was shot and killed by an assailant following the foot pursuit from an engagement with a police tactical unit that began about 1:45 p.m. — possibly on Monroe Street.

Commander Bauer was found in a basement stairwell, and was transported in traumatic cardiac arrest by Chicago Fire Department paramedics to Northwestern Memorial Hospital, where he was pronounced dead. Witnesses reported seeing the police officer treated with CPR chest compressions as he was transferred from a basement stairwell to an awaiting ambulance — Chicago Fire Department Ambulance 42.

A precession from Northwestern Memorial Hospital to the Cook County Medical Examiner’s office was expected to transport the body this afternoon. 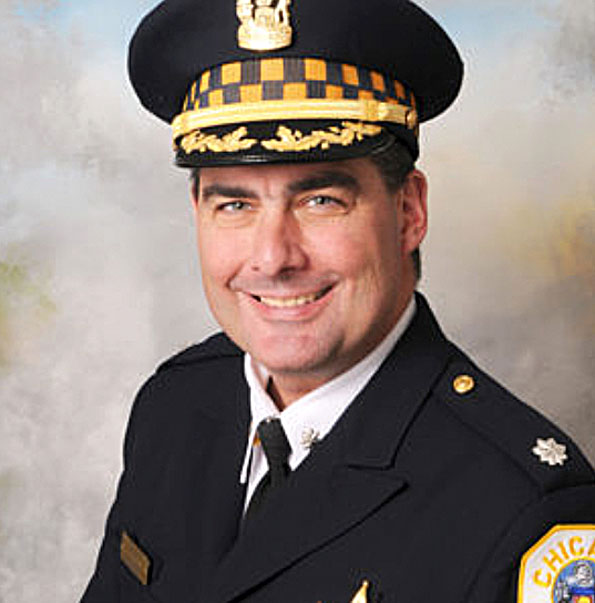 UPDATE – CPD officer assisting a tactical team and was shot by assailant. Transported to Northwest Hospital. Updates to follow pic.twitter.com/66XM1jrhDg

The officer shot and killed at the Thompson Center has been ID'd as Commander Paul Bauer https://t.co/b3TAhOmqwa pic.twitter.com/b8GphoV8Po

Commander Paul Bauer, as seen in a 2012 @WGNNews report from when he led the mounted patrol unit. pic.twitter.com/rB1CylGTO0

18th Dist Cmdr. Paul Bauer – a 31 year veteran of the CPD – was senselessly murdered today while safeguarding Chicago. Cmdr. Bauer was assisting officers in apprehending a suspicious person when he was fatally shot. Person of interest is in custody. pic.twitter.com/lwLGMBY27i