Offensive air odor is most likely to be noticeable on Monday, January 29, 2018 south of Central Road between Arlington Heights Road and Busse Road, especially after 4:00 p.m. when winds drop below 13 mph and wind gusts terminate.

Areas possibly affected are The Moorings, Dana Point Condo and East Park Apartments and areas nearby.

Sunday/Monday Overnight: Periods of snow showers, mainly between 7pm and 1am. Low around 23. North wind 10 to 15 mph, with gusts as high as 20 mph. Chance of precipitation is 80%. New snow accumulation of less than one inch possible.

Monday: Scattered snow showers, mainly before 7am. Cloudy, then gradually becoming mostly sunny, with a high near 28. North wind 10 to 15 mph, with gusts as high as 25 mph. Chance of precipitation is 30%.

Monday Night: Mostly clear, with a low around 15. North northwest wind 5 to 10 mph. 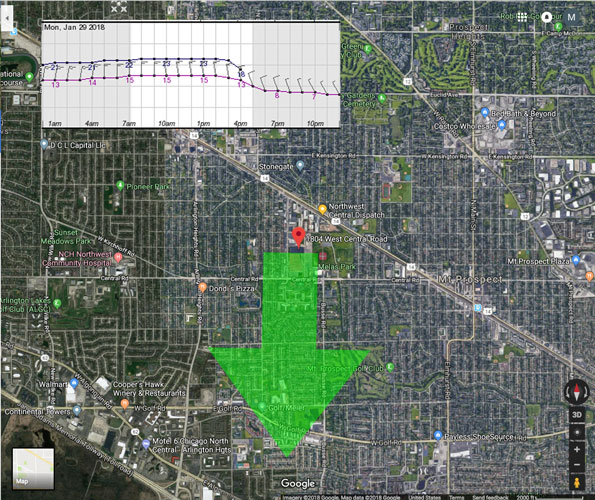 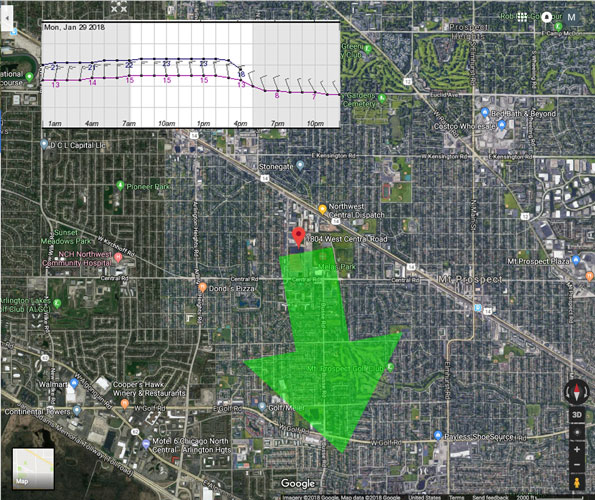 The Arlington Heights-Mount Prospect bad air forecast is based on wind direction and wind speed forecast from the National Weather Service forecast for Chicago’s official station at O’Hare International Airport. A manufacturing plant is allegedly providing a variety of air emissions and odors located on Arthur Avenue between Central Road and Northwest Highway, just west of Melas Park in Mount Prospect, Illinois. Odors are the worst on days with calm-to-light winds up to about 10 mph. Air emissions also depend on whether the plant is actually operating. According to the company website, the plant is capable of operating 24-hours per day, and uses the plant to pack detergent, pesticides and other chemicals into soluble packets.