Garoppolo, 26, will earn the additional $112,000 if the Patriots win the Super Bowl, or he’ll be paid an additional $56,000, for a total of $135,000 if The Patriots lose, ESPN’s Schefter reported. This means the Arlington Heights native could earn a maximum of $191,000 in post-season bonuses. Almost all staff of NFL teams playing in post-season games earn bonuses.

Hmmmm. Who is wondering if Garoppolo is eligible for a Super Bowl LII ring, too? Jimmy G was on the Patriots roster for 10 of 16 regular season games, or for most of the season until he was traded in late October.

Last season, Garoppolo managed to keep a perfect record as the 49ers starting quarterback. After adopting a 1-10 record, subbing in the SeaHawks loss, and before the team’s Week 13 game against the Bears (his first 49ers start), Garoppolo helped the 49ers close out their season with five-straight wins, beating the Bears, the Texans, the Titans, the Jaguars, and the Rams. Garoppolo completed 128 of his 178 attempts this season, which was good for 1,560 yards. He coordinated seven touchdowns to his five interceptions and one fumble.

The 49ers beat the Jaguars more handily than the Patriots beat them in the AFC Championship game Sunday, January 21, 2018.

The real reward Garoppolo is expected to make is likely happening during the offseason, with Garoppolo demanding more than $20 million per season as a free agent. 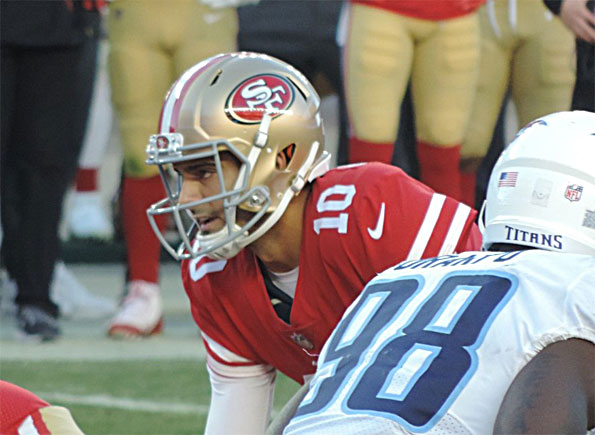