If you saw a police motorcade traveling through streets in Arlington Heights and other communities in Chicagoland on Saturday December 9, 2017, you probably saw Santa Claus. Police officers from the Chicago Police Department, Illinois State Troopers, and police officers from respective local communities provided a police escort for Santa, Mrs. Claus, Frosty the Snowman, and a few Elves. They were bringing cheer and presents to families of fallen police officers.

Members of the Chicago Police Memorial Foundation and friends and supporters accompanied Santa and Mrs. Claus on this year’s Operation Santa, delivering presents and Christmas Cheer to 17 families of Chicago Police officers who were killed or catastrophically injured in the line of duty.

Santa and helpers were making early deliveries in Chicago for children of police officers killed or seriously injured in the line of duty.llllll The event marks the 11th year for the gift-giving. This year 25 children will get presents this year as part of Operation Santa. One of their stops was located on the north side of Arlington Heights.

Operation Santa is a partnership between the Chicago Police Memorial Foundation and Macy’s. 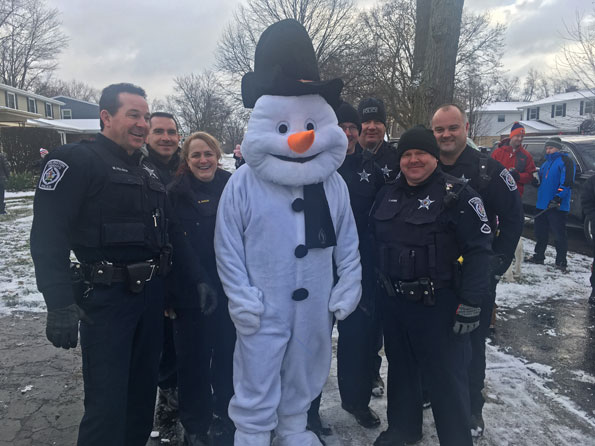