Lisle police and Lisle-Woodridge firefighter/paramedics responded about 8:41 AM Saturday December 16, 2017 to a report of a fully-involved house fire at 4711 Dumoulin Ave Lisle, Il. Police and firefighter/paramedics received a report from a passerby of a fully-involved house fire with some people out of the house. Initially rescuers were no certain if everyone was out of the house.

A large header was reported by responding fire units by 8:44 AM.

Firefighters also received a report from a 9-1-1 caller that a female jumped out of a second floor window to escape the fire.

General alarm and and extra ambulance requested by 8:44 AM — Medic 52 assigned.

Chief 50 on arrival reported a fully-involved single-family home, cars in the area indicating an occupied house, and a victim in the front yard by 8:45 AM.

A fire crew reported fully-involved fire also at the rear of the house by 8:46 AM. The crew also reported utilities were connected at the back of the house. Utility companies were requested to resond to the scene.

Chief 50 summarized a 2-story single-family home, fully-involved house fire with all occupants accounted for, and three hose lines on the fire, a secure water source, and utilities exposed to the fire.

Two additional ambulance were requested by 8:52 AM. to check on a report of children that escaped to a neighboring house.

Medic 55 reported they were en route with one patient to Level I Trauma Center Advocate Good Samaritan Hospital by 8:55 a.m.

An EMS General or EMS Box Alarm with four additional ambulance wasrequested by 8:59 AM to evaluate children and family members that escaped the house fire. Fire ambulance communications on local frequency (not IFERN).

Two adults and four children were inside of the house when the fire broke out, according to Fire Chief Keith Krestan, Lisle-Woodridge Fire District .

Members of the family had opened a second-floor window and had escaped or were escaping when the first firefighters arrived.

Two adults and four children were evaluated by paramedics at the scene. At least two people were transported to hospital(s) where they were listed in serious condition.

The fire was under control within 20 minutes with the work of about 26 firefighter, involving two truck companies, four engine companies. Seven or more paramedic ambulances and crews were also working at the scene. 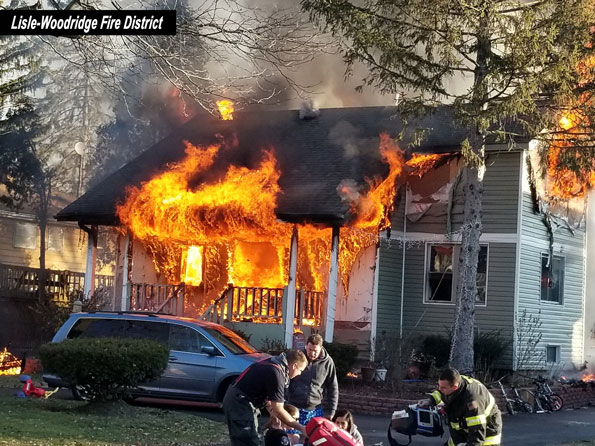 LIVE TRAFFIC MAP of neighborhood to a report of a fully-involved house fire at 4711 Dumoulin Ave Lisle, Il …