ABC 7 Chicago reported Thursday reported that an ABC7 viewer shared a video showing two large coyotes crossing the street in front of her car and running through yards in the area near North Douglas Avenue and East Marion Street, near Hickory Meadows Park.

The viewer told ABC 7 Chicago that children were walking along the sidewalk to school at the time. Olive-Mary Stitt School is located a little over a block southwest from the location where the video was recorded. Also the coyote-spotting location is located less than500 feet from Orchard Evangelical Free Church, and the sledding hills and tennis courts of Green Slopes Park.

In the video, two coyotes are walking northeast through Hickory Meadows Park, and then cross the block of 600 East Marion Street — walking northbound, just west of Hickory Avenue. One coyote pauses and peers at the viewer with the camera, while the other coyote in the lead proceeds a little more cautiously. The trailing, paused coyote then appears to look to the first coyote for guidance, and proceeds with a little more caution as well.

A coyote or coyotes killed one dog and injured another in a backyard in the block of 1500 West Edgewater Lane, Palatine about 8:00 p.m. Thursday November 9, 2017. The neighborhood is located south of Deer Grove Forest Preserve between Dundee Road and Northwest Highway (US 14).

Readers on Facebook, responding to the coyote sighting near Hickory Meadow retention pond and skating rink, commented that Coyotes have been observed …

• behind Best Buy in Arlington Heights about 6:00 p.m. this November,

• near Ttowa near Jewel-Osco, Vail Avenue and Wing Street, and in

Coyote sightings have been reported for several years on Arlington Cardinal.

Coyotes are capable of approaching quickly, and grabbing a small dog in their mouths and carrying the pet quickly away without chance for rescue. Coyotes can run up to about 40 miles per hour. 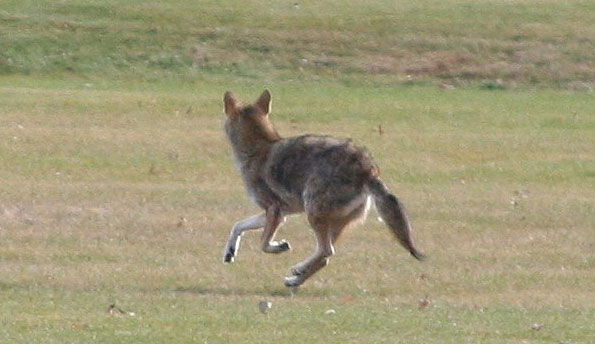 Over the past ten years or more, coyotes have most often reported in four locations in Arlington Heights:

• Near Hintz Road Road on both sides of Arlington Heights Road, and just south of Hintz Road along McDonald Creek, and near St Edna Catholic Church and Camelot Park (this location is just south and west of Centennial Park).

• Near Rolling Green Country Club and Memory Gardens Cemetery along Euclid Avenue and in woods nearby.

• Near Heritage Park and just north of Lowes near Kingsbridge Aboretum, probably in connection with proximity to Busse Woods to the south.

Coyotes that are not afraid of humans are probably more likely to attack small dogs for food. Small dogs, especially in the four areas of common coyote sightings, should never be left alone in the yard. Coyotes are very fast, too. They can run up to speeds of about 40 mph. They can sprint to a small dog, and drag it away within seconds.

Video from an unknown location that shows the speed involved when a coyote attacks a small dog in 2010. Fortunately for this Chihuahua-wiener dog, a strong and fast Rottweiler came to his rescue and chased the coyote away (The YouTube channel publisher said there had been no coyote sightings in the area).