On Monday after the Chicago Bears game against the Green Bay Packers Sunday, November 12, 2017, Drudge Report headlined empty seats at Soldier Field with a referral to an article on thegatewaypundit.com. Although no text accompanied the Gateway Pundit article that showed Tweets with photos of empty seats, the underlying message was apparently aligned to show the effects of the current reported downfall of NFL ratings and the Veterans Day protests in response to NFL Colin Kaepernick-related national anthem protests. 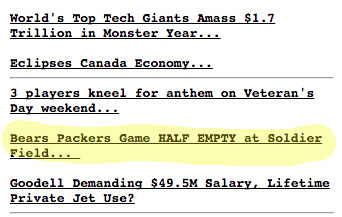 A light rain was falling from about 10:30 a.m. until 3:00 p.m. Game time was 12:00 noon. Many United Club Seat Season Ticket holders were taking advantage of the shelter of climate-controlled indoor lounge amenities of the United Club. Many other fans were also sheltered from the rain under the seats inside the enclosed sections of the stadium.

The Gateway Pundit is considered a right-wing, far-right or alt-right website.

A light rain is falling at Soldier Field a little more than 30 minutes before kickoff. pic.twitter.com/LCppUnqgbh