Beginning today, Friday October 27, 2017, if you get pulled over by police in Arlington Heights for violating a distracted driving law, you might be surprised to learn that you will get a cellphone cradle gift from the police officer instead of a $120 ticket.

Talking or texting on the phone would normally cost you $120 with a citation in Arlington Heights, but starting Friday October 27, 2017 through November 1, 2017, you could get a cellphone cradle and warning from police instead of the expensive citation.

Arlington Heights police officers who spot drivers using their phones while driving during the “Cradle Your Distraction” period will pull over vehicles and hand out the magnetic cradles, which can attach to a heater/AC air vents. But, not distracted driving ticket will be issued. 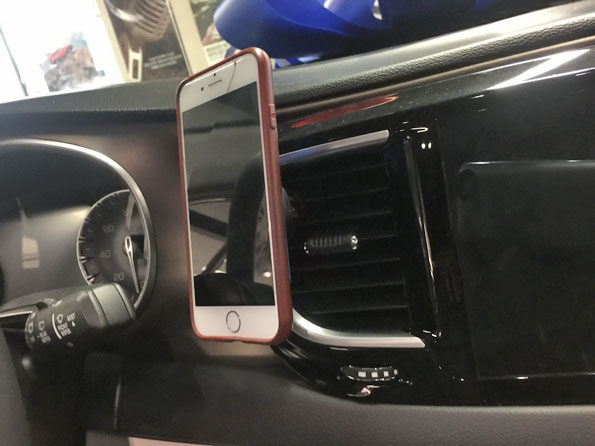 The program will debut as part of the Traffic Bureau’s Halloween Traffic Safety Campaign. During the “Cradle Your Distraction” campaign, traffic officers observing violations of distracted driving statutes will curb the vehicle and educate the driver on the increased perils of operating a vehicle while distracted by use of electronic devices such as cellular telephones.

While any available police officer on patrol can stop a driver for distracted driving, Arlington Heights Police Department has a dedicated traffic bureau concentrating on traffic safety during specific hours of the day.

The concept is to promote hands-free, legal driving; and promote safety.

The Arlington Heights Police Department is committed to reducing the number of accidents associated with distracted driving and making the streets safer through not only enforcement efforts, but also through such educational initiatives. Over the past 2 years the Arlington Heights Police Department has issued 3,102 citations for electronic communication device (cell phone) violations.

Over the past 2 years the Arlington Heights Police Department has issued 3,102 citations for electronic communication device (cell phone) violations.

Unfortunately, the problem doesn’t seem to be improving. The percentage of driver’s observed text-messaging or visibly manipulating handheld devices, at any time, increased from 1.7 percent in 2013 to 2.2 percent in 2015.

Cell phone distracted driving has become a serious public health threat. A few states have passed legislation making it illegal to use a handheld cell phone while driving. These laws give the false impression that using a hands-free phone is safe.

Drivers involved in handsfree cellphone conversations have been involved in very serious crashes, including fatal crashes, according to the National Safety Council. Researchers have classified crashes involving handsfree conversations as events of “inattention blindness” caused by the cognitive distraction of the cell phone conversation. Research estimates indicate that drivers using cell phones look but fail to see up to 50 percent of the information in their driving environment, causing drivers to fail to process everything in the roadway environment that they must detect to effectively monitor their surroundings. During a phone conversation, they fail to seek and identify potential hazards, and respond to unexpected situations.

The National Safety Council also points out that “technical advances” such as Voice-to-Text and autocorrect often cause more problems because of errors introduced by the imperfect human-machine interface. 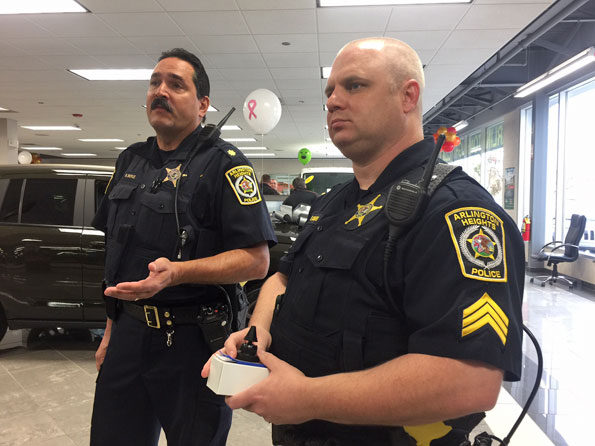 Police formally kicked off the campaign Monday at a news conference at Napleton Chrysler Dodge Jeep Ram on Dundee Road in Arlington Heights. The department is also publicizing the campaign on Arlington International Racecourse billboard near Route 53 just south of Commuter Drive.

The police officers expressed concern that many people still think texting is OK, and that only talking on a cell phone violates the law. Texting, even while stopped at a stoplight, is a violation of the law.

The Arlington Heights Police Department traffic bureau was recognized for helping the police department receive the Clayton J. Hall Memorial Award from the International Association of Chiefs of Police in October 2016 at an annual conference in San Diego. The award is given to the law enforcement agency judged to have the most comprehensive traffic safety program in the nation — among police departments that have 101-350 sworn police officers.

The cradle includes a business card pocket with a card that reminds motorists that use of a cellphone while driving increases the chance of being involved in a crash by 400 percent. The police department, in partnership with Napleton Auto Group, purchased 2,000 cradles.

Police are planning a similar effort during the Christmas and Holiday Season.

Drivers who are interested in getting a cradle without a police traffic stop, can call Douglas Adams, Napleton’s customer relations manager at 847-298-0900 and request a free cradle.