UPDATE: Lincolnshire police attempted a traffic stop of a vehicle about 7:30 p.m. Wednesday September 13, 2017 after receiving a police bulletin about an armed robbery that occurred in the block of 1500 North Barclay Boulevard, Buffalo Grove. Three armed suspects wearing masks bailed out of the stopped vehicle, which appeared to be in a turn from northbound Milwaukee Avenue to eastbound Olde Half Day Road. The three suspects fled eastbound on foot from Milwaukee Avenue and Olde Half Day Road.

All three suspects were captured with the last suspect captured about 9:13 PM Wednesday night.

Police investigators appeared to carry evidence out of a U-Haul truck that was stopped in a turn from northbound Milwaukee Avenue to eastbound Olde Half Day Road.

MCAT investigators are on the scene taking photographs, taking measurements, and using a drone. The has taken off at least three times in an hour — taking images from all sides of the intersection — south, west, north, and east. The crash scene investigation with the Lake County Major Crash Assistance Team (MCAT) on the scene was an extended operation which closed down Milwaukee Avenue between Route 22 (Half Day Road) and Jamestown Lane at least past 2:00 a.m.

Police were searching the area for three male black subjects — armed with handguns. The first suspect was in custody — possibly by 8:10 p.m. Much of the police activity appeared to be near the north leg of Olde Half Day Rd and Milwaukee Avenue. There is a Walgreens, and a La Rosa Pizzeria in the area.

Police Activity and fire/medic staging was also located in the area of Route 45 and Milwaukee Avenue.

Lincolnshire-Riverwoods firefighter/paramedics were on the scene of a crash in the area of Olde Half Day Rd and Milwaukee Avenue.

Police had an active mutual aid ILEAS response on the scene. Multiple police officers were working on holding a search perimeter, and traffic control.

The suspects were last seen eastbound on foot from Olde Half Day Road and Milwaukee Avenue.

A police helicopter was also overhead searching for the suspects, and was overhead by about 8:40 p.m.

One suspect — possibly the first suspect or second suspect captured — was reported held by police at gunpoint in the area.

One suspect was also reported floating on a log in the Des Plaines River (or Indian Creek). That suspect was in custody by 8:56 p.m. Police were actively searching a forest preserve and a cemetery in the area — Vernon Cemetery.

At least one suspect was still at large about 9:00 p.m. Police activity was also concentrated near the Vernon Cemetery, across from Einstein Brothers Bagels and just northeast of Milwaukee Avenue and Olde Half Day Road.

The third suspect was spotted near Prairie House Restaurant on Main Street by 9:13 p.m.

ALL THREE SUSPECTS IN CUSTODY BY 9:13 PM.

Police were conducting additional searches, as a precaution for any possible suspects and to search for evidence.

LIVE TRAFFIC MAP of neighborhood to a report of police activity following an armed robbery and a crash near Half Day Road and Milwaukee Avenue Lincolnshire, Il … 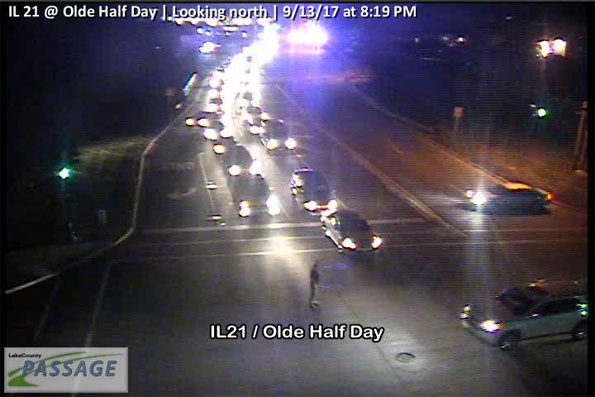