A seasonal Italian American Cuisine restaurant named Passero, at 5 West Campbell Street, will be opening soon, about mid-October near the corner southwest corner of Campbell Street and Dunton Avenue. Passero will have a menu inspired by family recipes and other creations of head chef Matt Peota, and be geared to families with kids. The menu will include a short rib lasagna, made through a slow cooking method, and unique appetizers such as popcorn that tastes like pizza, Peota said. Peota’s wife, Rikki, Matt’s father own the restaurant.

Interior renovations of the long and narrow, but cozy restaurant space, have been underway since mid-July 2017. The Passero restaurant has a targeted opening date of Tuesday, October 17, 2017. Passero restaurant is in the location most recently occupied by the former Day Go Dogs and ‘Za, which closed in May 2016 after about one year at the location. The building for several years was also the location of the former Riviera Restaurant or “The Riv” — the original restaurant that occupied the space beginning in 1991. The Riv was originally located for many years on Vail Avenue between Campbell Street and Davis Street at 19 North Vail Avenue. Approximately where Bangkok Cafe – Arlington Heights is located now.

The Passero restaurant was granted a full service Class A liquor license Tuesday night September 5, 2017 at the Village of Arlington Heights board meeting, and the liquor license will be issued once renovations and furnishings are complete, and village staff can do a walk through. Soon after a successful inspection, the restaurant owners plan to serve beer, wine and about five craft cocktails with their menu.

Passero hours of operation will be …

An intro version of the website is currently available at eatpassero.com 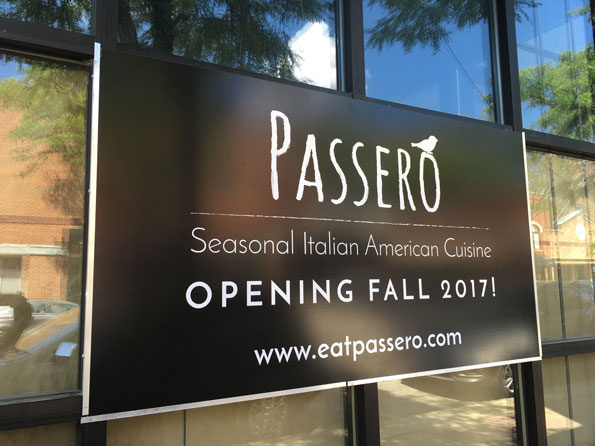