Angela Ahrendts, Senior Vice President of Retail at Apple Inc announced Tuesday September 12, 2017 that the new Chicago flagship store will open Friday, October 20, 2017. Designed by London-based Foster+Partners, the new 20,000-square-foot, $62 million store is a giant glass box built from Pioneer Court at 401 North Michigan Avenue to the north bank of the Chicago River. The roof of the glass box store along the north bank of the Chicago River resembles an Apple MacBook notebook computer.

Angela Ahrendts, announced the opening date for the new Chicago Apple Store on the same day as the product announcement for the ten year anniversary iPhone, named the Apple iPhone X.

Construction for the new store lasted about 18 months. The new Apple Store Chicago was approved in November 2015. Tribune Tower looms in the background when looking north from the Chicago River at the northeast corner of Michigan Avenue and the Chicago River. The new Apple store is located at the gateway to upper Michigan Avenue, just west of the Fidelity Investments high-rise, just south of Pioneer Court and Tribune Tower, and across Michigan Avenue from the Wrigley Building — brightly lit at night. Another Chicago media company, NBC 5 Chicago, is located at NBC Tower on Columbus Drive, just east of Pioneer Court and the Fidelity building.

Pioneer Court is a well-known Chicago plaza that displayed the giant Forever Marilyn statue from 2011 to 2012.

The new store will open just after Apple releases the iPhone 8, starting at $699, on September 22, 2017. Apple’s new iPhone X, starting at $999, will be available in stores November 3, 2017, and will be the first major product available at the new Chicago Apple Store. 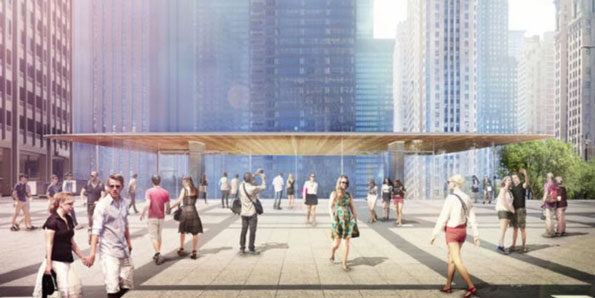