Hurricane Irma made its second landfall on Marco Island on the southwest Florida coast at 3:35 p.m. EDT after first making landfall in the Florida Keys this morning at 9:05 a.m. The hurricane, which was immediately over Naples after striking Marco Island.

All of Marco Island was reported without power as the Hurricane made its second landfall on Florida on September 10, 2017. The Weather Channel reporter Mike Bettes reported seeing traffic signals still working in Naples at about 4:54 p.m. EDT.

Three people were reported dead in Florida, including two law enforcement officer who crashed into each other in a head-on crash in Hardee County southeast of Tampa.

By 11 a.m. today the storm had moved away from the Keys and is forecast to continue moving up the western coastline of Florida this afternoon, with winds of up to 115 mph expected in the western part of Collier County, which includes Naples.

In Florida, over 2.1 million households were without power by mid-afternoon.

Hurricane Irma was downgraded to a Category 2 Hurricane at about 3:55 p.m.

There was sunshine showing in the eye of the hurricane over Naples, Florida at about 4:04 p.m.

Winds continue gusting to 60-70 mph across the Keys as the eye of Irma approaches Naples pic.twitter.com/J33Fmg1oEg

The Germain Arena just outside Naples is now home to 5,000 Floridians who have fled Hurricane #Irma https://t.co/OP8CgOnCe6 pic.twitter.com/DfWn8v6zm4 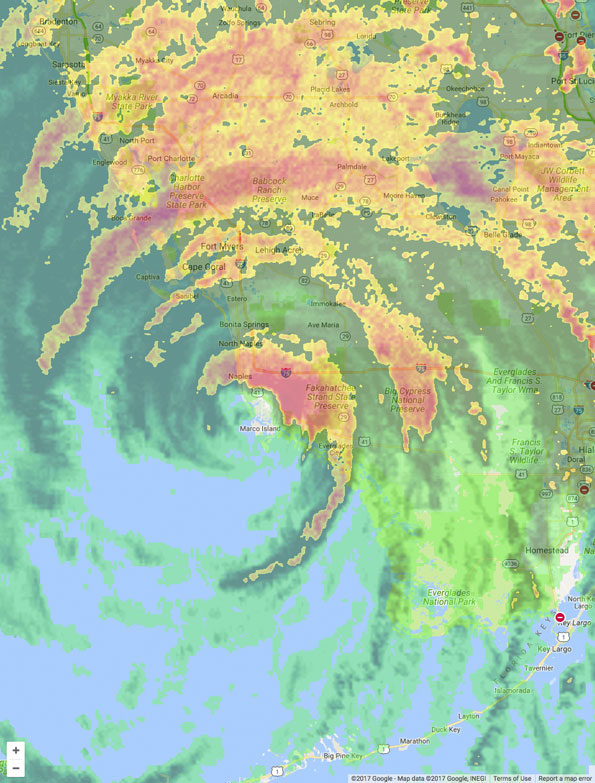 Radar and satellite image as Hurricane Irma was over Naples about 50 minutes after the second Florida landfall at Marco Island.