Chicago police and firefighter/paramedics responded about 6:33 PM Tuesday August 22, 2017 to a report of a vacant warehouse fire at 6007 West Dickens Avenue Chicago, Il. Engine 125’s crew on arrival reported a fire in a building about 800 x 200 on McVicker Avenue. Engine 125’s crew set up their deck gun for an exterior attack at the front of the building.

Battalion Chief 8 on arrival reported a 2-story vacant warehouse, 1200 x 500 with a little bit of smoke showing, and asked for a Vacant Building Response. A sign on the building from a Google Street View image from October 2016 showed Office, Workshops, Warehouse and Outdoor Storage available from 500 to 300,000 square feet.

The building, which is now structurally unsound, was the former home of the Zenith Electronics company until the late 1990s.

Zenith was co-founded by Ralph Matthews and Karl Hassel in Chicago, Illinois as Chicago Radio Labs in 1918. At the company’s peak operation there were seven plants in Chicago. The headquarters was located at Plant 1 at 6001 West Dickens, where employees made radios, stereo phonographs and televisions. Plant 3 at 5801 West Dickens Avenue made electronics and involved servicing products. Marketing share for Zenith was lost to Japanese electronics companies accused of dumping products in the 1970s.

There were problems with an open radio mic starting about 6:50 p.m. for about 10 minutes.

The Reserve Snorkel was out of service.

Deputy District Chief 222 reported the fire is in the east end of the building with four or five master streams flowing, and it was unknown how far the fire had traveled at 6:52 p.m.

Tower Ladder 23 was assigned to come from the west and back down Dickens. Command reports an engine is needed to feed Tower Ladder 23.

TL10 assigned to come in on Dickens from the west.

2-7-2 reporting for District Chief 2-1-21: At 7:42 p.m. the fire was basically under control, but running along the roof line: two tower ladders were working with another tower ladder being set up. Two ladder pipes were also working and the fire operations was 100% defensive.

The fire was out on the west end of the building at 8:37 p.m. with firefighters chasing hot spots.

A fuel truck was also called to the scene about 8:42 p.m. to supply working engines and trucks. 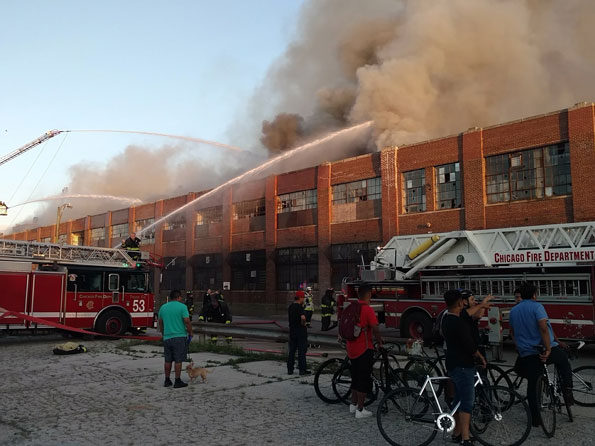 LIVE TRAFFIC MAP of neighborhood to a report of a vacant warehouse fire at 6007 West Dickens Avenue Chicago, Il … 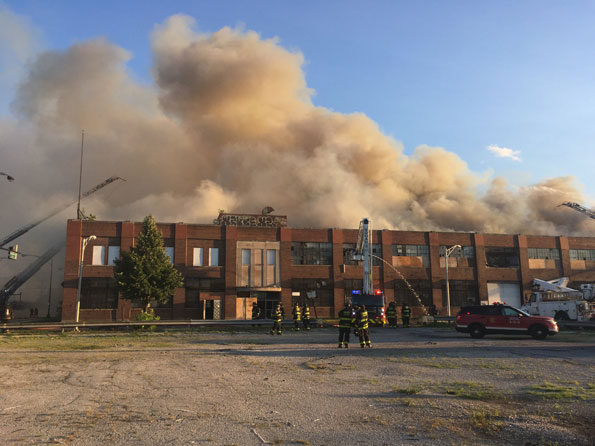