Grayslake police and firefighter/paramedics responded about 9:30 a.m. Monday, July 24, 2017 to the block of 200 Amendola Way to a report of a woman struggling with a man in the driveway of a home.

Police discovered that a 60-year-old woman had been attacked by her 32-year-old son at the home of the son’s grandfather, who died the day before. Police learned that the son, identified as Adam Kuehn, and his mother, of Round Lake, were visiting the home of the deceased grandfather to pick up a suit for his grandfather’s funeral. The mother and son live in the same house about five miles from the grandfather’s home.

“We knocked on the door, announced ourselves, and out steps the victim — and she’s just soaked in blood.”

Police learned that her son, Adam Kuehn, strangled his mother and cut her throat. His mother was able to escape the house, but a neighbor witnessed Kuehn trying to drag his mother back inside. The neighbor called police, possibly saving the woman’s life.

The son fled the scene on his bicycle, but was spotted by a Round Lake police officer running into an overgrown field. Kuehn dropped down in high weeds and crawled about 75 feet to a farmhouse where a Lake County sheriff’s police dog tracked him. Kuehn was arrested about 20 minutes after the initial 911 call. 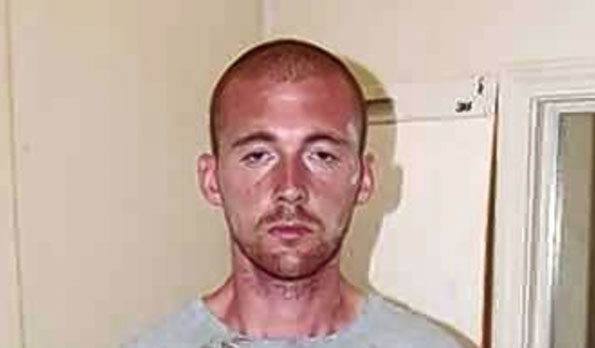 Adam Kuehn, of the 200 block of Newhouse Lane in Round Lake Park, was charged with four felony charges …

• aggravated battery with a deadly weapon,

Adam Kuehn also faces a misdemeanor charge of resisting arrest, and police are continuing to investigate the case.

According to court records, Kuehn has at least three prior convictions for violent crimes in Lake County …