Strong winds from a microburst downed trees, damage roofs and damaged power lines from Elgin to Schaumburg, to Hoffman Estates and to Elk Grove Village and Itasca on Friday July 21, 2017 just before 5:00 p.m.

After the storm hit, at least 450 crews ComEd crews were out working Friday night through Saturday. Also, after the worst of the storm was over about 2:00 a.m. Saturday — and long after the 5:00 p.m. Friday microburst — a particularly intense, bright and isolated lightning strike hit a transformer and caused a transformer fire in the area of Sunset Drive and Douglas Avenue in Arlington Heights. The isolated thunder was especially loud, and rumbled for a prolonged period. Seconds later, the Arlington Heights Fire Department was called out for help. In the neighborhood, about 70 ComEd customers were without power, and power wasn’t restored until about 12:12 p.m. Saturday. Arlington Heights, the neighboring suburb to the north of Elk Grove Village, did not experience the damage that occurred in Elk Grove Village. The Elk Grove Village damage was concentrated near Devon Avenue and Park Boulevard — including Hamilton Lakes to the south in Itasca, and Talbot’s Mill in Elk Grove Village to the north. Rainfall in Arlington Heights was measured 1.45″ while Elk Grove reported 1.57″ and Elgin 2.83″ and Naperville 2.16″. 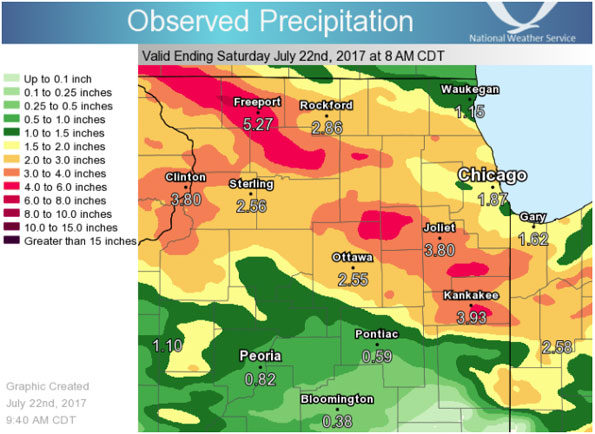 A lightning strike just before 10:00 p.m. Friday, July 21, 2017 also caused a house fire that left a home uninhabitable in the block of 29W200 Andermann Drive in unincorporated Will County.

Firefighters used about 2,000 feet of hose to connect several fire engines from a hydrant to the scene, in order to extinguish the house fire. The neighborhood did not have fire hydrants.

In Elgin the microburst and associated rain (estimated 2 inches plus in Elgin) caused flooding and closed Wing Park on the city’s near west side. Elgin public works crews received more than 350 calls for service, and estimated 5,000 ComEd customers were without power early Saturday. ComEd set up facilities in front of the Elgin Police Department that included a cooling bus and water for people needing to get out of the heat.

The microburst also hit parts of the Timbercrest and Timbercrest Woods subdivisions in Schaumburg. Hail piled up on the ground, while ripping vegetation and damaging roofs and window screens. Much of the hail appeared sharp and jagged.

ComEd also set up facilities in front of Itasca’s police station, including phone charging stations. Due to the area-wide power outage, high humidity and high temperatures, the American Red Cross was also contacted to respond to the Village Hall, located at 550 W. Irving Park Rd. The Village of Itasca also requested light towers from fire departments from Westmont, Pleasant View and Elmhurst. The light towers were strategically placed throughout the village to illuminate intersections.